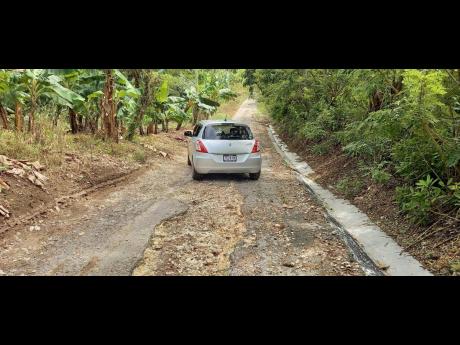 Gareth Davis Sr
A section of the road in Marlie, St Mary, which is in urgent need of repair. Member of parliament Robert Montague has assured the rersidents that he is addressing the problem and also promised to provide pipe water to the communitiy. 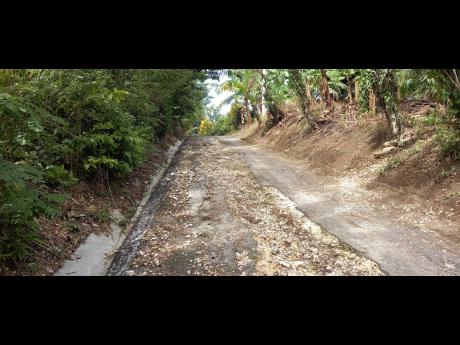 Gareth Davis Sr
A section of the road in Marlie, St Mary, which is in urgent need of repair.
1
2

Residents in the district of Marlie in western St Mary have been urged to exercise patience as they await the rehabilitation of more than five kilometres of roadway in that community, which is long overdue.

The call came from member of parliament (MP) for the area, Robert Montague, who told The Gleaner last week that the National Water Commission (NWC) has approval to carry out major pipe-laying activity throughout that community, which has never had piped water through its history.

“Money from the Constituency Development Fund (CDF) is with the NWC to commence such activities,” Montague said.

“It’s a joint-up project between the CDF and the NWC. But due to persistent heavy rains, they (NWC) are swamped with work. The community is without water and I am going to ensure that every household benefits under this project,” he said. “That section of roadway is very bad, but it is better for the pipes to be laid first, so that the people will benefit from potable water. The pipe project should have been completed before the Christmas holiday, but the heavy rainfall disrupted a number of NWC systems.”

Montague is urging the residents to exercise patience. He informed that some pipelines and water treatment facilities that were disrupted or dislocated are been addressed.

According to the MP, measures will be put in place to expedite the work, adding that he is fully aware of the plights faced by residents who he claimed deserve far better roads and adequate water supply.

He said that upon completion, Marlie will be one of the many rural communities where its residents will have full access to potable water, and an improved and fully rehabilitated roadway.

Meanwhile, a resident of the community, Joedian Nelson told The Gleaner via telephone that water has been running through their pipelines since last Sunday.

“We were promised pipe water and I am happy to say that we can now carryout our domestic chores with utmost ease,” she commented.

“I would like to think that walking several miles to catch water and carry buckets on our heads is now a thing of the past. We were promised water and we are now getting it. I am one of those persons, who will be holding my political representative accountable,” Nelson said.

“If you are elected to do a job, then make sure that you are able to do so or else pack up and leave,” she said.