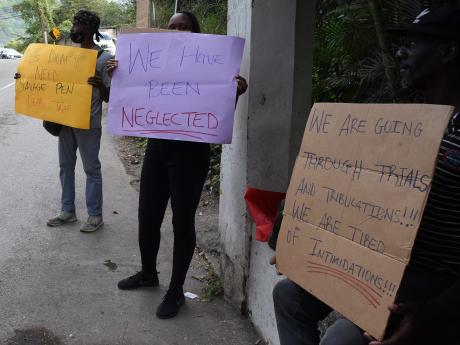 Residents gathered at the vicinity of Grove Primary near the breakaway in Gordon Town to protest the condition of the Savage Pen Road on Monday, January 18, 2021. (Kenyon Hemans - photo)

Residents from Mavis Bank, St Andrew, gathered this afternoon at Mammee River Street for a peaceful protest to draw attention to the dangerous road conditions in the community.

The steep, winding slopes have led to three car accidents in recent times and are said to be the reason for the lack of water in the Top Road community.

"Savage Pen is a death trap, and we actually want a contingency plan to be able to see what is going to be done, and we want some urgency," said the organiser of the protest, Mishkah Hall.

Placards reading "We don't need Suicide Pen death road," among others, were being displayed, even from the back windscreen of a taxi.

Hall is pleading with the authorities to present another road option as the Savage Pen Road is not accessible in the case of an emergency.

"Only one in ten vehicles can traverse that 'death trap'," she said.

Though sections of the marl road have been compacted by heavy machinery, the route remains slippery and dangerous, even for a four-wheel- drive.

Stephen Shaw, communications manager of the National Works Agency, noted that there is another route available to motorists, though it may take longer.

"We have said from day one that the Savage Pen Road will only be appropriate for certain vehicles... if they are not able to use Savage Pen, then there is always the option of going the longer route, which we accept and admit it is longer, but it is available," Shaw said.

He said the Savage Pen Road, which was scheduled to be opened today,  will be completed by the end of the week.