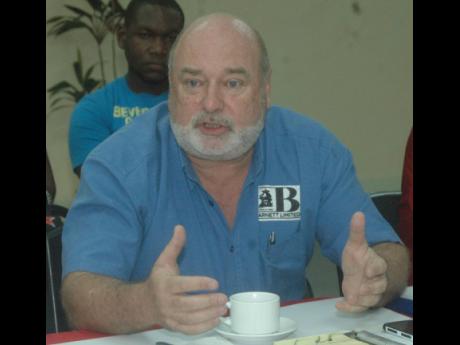 Prominent Montego Bay businessman Mark Kerr-Jarrett, who heads the crime portfolio in his capacity as a director at the Montego Bay Chamber of Commerce and Industry (MCCI), is threatening to spearhead a demonstration in the streets of the western city to draw attention to a malfunctioning bridge located on the Howard Cooke Boulevard.

According to Kerr-Jarrett, the city’s stakeholders have been pleading with the authorities over the past three years to effect repairs on the bridge, which has gaping holes, but to no avail. The bridge, which poses a danger to motorists and pedestrians alike, runs across the lower section of the North Gully.

“Madame president (Janet Silvera), I will go to the streets with you … but I hope it does not require that kind of activity in order to be treated fairly,” said Kerr-Jarrett, while speaking at a media conference in Montego Bay last week.

IN NEED OF REPAIRS

According to the businessman, the bridge was identified by the authorities as being in need of repairs over a year ago, but nothing has been done to date.

“If that bridge becomes unstable and the Montego Bay perimeter road is not in place, the entire traverse of Montego Bay will be reduced to two lanes, which means that it will take up to six hours to get across the city during peak hours,” said Kerr-Jarrett.

Looking at a worst-case scenario if the repairs are not done soon, Kerr-Jarrett said Montego Bay could be exposed to a potential traffic nightmare, which would be totally unacceptable since the authorities are aware of the situation and the need to do the required repairs.

“You can drive to and from Kingston in that time,” he said, in emphasising the time it would take to traverse the city if the situation gets worse. “It is totally unacceptable and it’s a result of the backhanded manner in which Montego Bay has been treated by successive governments.”

“It is time for it to end! That infrastructure needs to be done. We are the breadbasket of this country, and further procrastination and political expedience spending need to end now,” insisted Kerr-Jarrett.