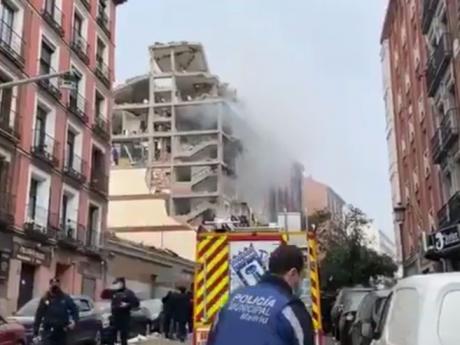 Emergency services attend the scene of an explosion in Madrid, on Jan. 20. Source: Emergencias Madrid

MADRID (AP) — A powerful explosion apparently caused by a gas leak ripped the facade off a residential building in central Madrid on Wednesday, killing two people and injuring at least two more, according to the mayor.

The first images and footage shared on social media showed a tower of smoke coming out from the six-story building and rubble scattered in Toledo Street, near the city center. Emergency crews could be seen aiding several people on the ground.

Mayor José Luis Martínez Almeida confirmed the two deaths and two injuries to reporters as he visited the site and said that the initial assessment was that the blast was caused by a gas leak. The Madrid general vicar, Avelino Revilla, told Spain’s TVE that one person linked to the Catholic church occupying part of the building was still missing.

Madrid's emergency services say rescue teams, firefighters and police are working in a central area of the Spanish capital following an explosion that witnesses described as “extremely loud.”

Videos and images shared on social media showed a tower of smoke coming out from a building and rubble scattered in a central street of Madrid. Spanish public broadcaster TVE said the explosion took place in a building near a nursing home.

Leire Reparaz, who lives near the Puerto de Toledo, a local landmark, told The Associated Press that she heard a loud explosion.

“We didn’t know where the sound came from. We all thought it was from the school. We went up the stairs to the top of our building and we could see the structure of the building and lots of grey smoke,” the 24-year-old Madrid resident said.