Trump impeachment to go to Senate on Monday, launching trial 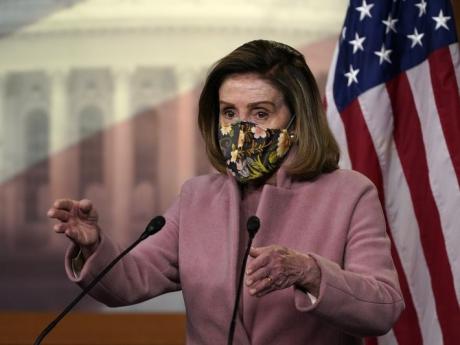 WASHINGTON (AP) — House Speaker Nancy Pelosi plans to send the article of impeachment against Donald Trump to the Senate on Monday, launching the start of the former president’s trial on a charge of incitement of insurrection over the deadly Capitol riot.

“There will be a trial,” Senate Majority Leader Chuck Schumer said in making the announcement Friday. “It will be a full trial, it will be a fair trial.”

Trump is the first president to be twice impeached and the first to face a trial after leaving office.

While the transmission of the article launches the trial proceedings, the schedule ahead remains uncertain as the Senate, now in Democratic control, is also working to swiftly confirm President Joe Biden’s Cabinet nominees and tackle the new administration’s legislative priorities.

Biden says the Senate can do both and Schumer said he also speaking to Senate Republican leader Mitch McConnell about the “timing and duration” of the proceedings ahead.

“Senate Republicans strongly believe we need a full and fair process,” McConnell said after Schumer spoke. On Thursday he proposed delaying the start of Trump’s trial to February to give the former president time to prepare and review his case. Trump is still assembling his legal team..

House Democrats who voted to impeach Trump last week for inciting the deadly Jan. 6 Capitol riot say a full reckoning is necessary before the country — and the Congress — can move on.

Pelosi said Trump doesn’t deserve a “get-out-of-jail card” just because he has left office and Biden and others are calling for national unity.

Facing his second impeachment trial in two years, Trump began to assemble his defense team by hiring attorney Butch Bowers to represent him, according to an adviser.

“This year, the whole world bore witness to the president’s incitement,” Pelosi said.