Caribbean’s foreign trade at its worst since global financial crisis 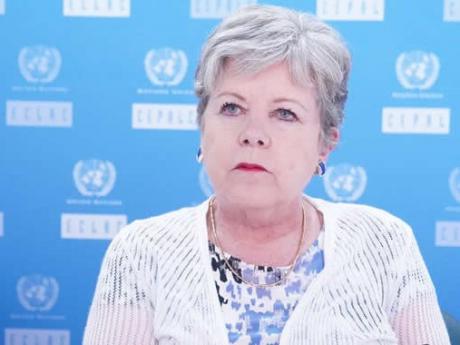 Executive secretary of the Economic Commission for Latin America and the Caribbean, Alicia Bárcena (CMC photo).

The Economic Commission for Latin America and the Caribbean (ECLAC) says the region’s foreign trade in 2020 had its worst performance since the global financial crisis of 2008-2009, because of the economic crisis prompted by the global COVID-19 pandemic and the restrictions imposed by governments to stop its spread.

In its annual report, published on Friday, ECLAC estimated that the value of regional exports dropped 13 per cent in 2020, while imports shrank by 20 per cent.

The document indicates that this contraction in the value of exports is smaller than what was forecast in early August of last year (-23 percent), when the institution released its “Special Report COVID-19 No. 6”, because, at that time, “the rebound in demand among the region’s main trading partners, and China in particular, was not yet visible.”

“It is necessary to deepen integration to drive the regional recovery,” Bárcena said. “The region has been disintegrating in terms of trade and production since the middle of the last decade, coinciding with its lowest growth in seven decades.

“This is very worrisome, because intra-regional trade is the most conducive to productive diversification, the internationalisation of companies (especially MSMEs – micro, small and medium enterprises) and gender equality,” she added.

Bárcena insisted that, in order to reverse this disintegration, it is important to move ahead on a shared agenda regarding trade facilitation, transportation and logistics infrastructure, and digital cooperation “to generate regional synergies in key dynamic sectors.”

“It is urgently necessary to reinvigorate regional integration to support the post-pandemic recovery,” Bárcena emphasised. "Greater convergence is needed between distinct integration mechanisms in order to overcome the fragmentation of the regional market and to support a sustainable and inclusive recovery."

She added: “It is also critical to foster the participation of female workers and entrepreneurs in dynamic sectors and in regional productive chains, for a transformative recovery with gender equality and sustainability,” she added.

According to the report, the COVID-19 pandemic has intensified various tendencies that were already developing in global trade, including trade and technological tensions between the United States and China; growing economic nationalism and conflicts in trade relations and the weakening of multilateral cooperation. On the other hand it has increased the of the digitalisation of production and trade and the trend towards regionalising production through near-shoring (locating suppliers in countries that are closer to the target market) and re-shoring (relocating strategic productive and technological processes to the country of origin).

The document indicates that the recovery in the prices for commodities and the increase in demand from the United States, China and Europe have created the conditions for an incipient recovery in regional exports since the second half of 2020.

However, that improvement is subject to considerable uncertainty, due to the renewed outbreaks that have occurred in numerous countries, as well as slow access to vaccination, the report says.

ECLAC’s 2020 estimates by sub region indicate that Central America exhibited the smallest decline in its exports, notching -2 per cent.

ECLAC said this is due largely to the fact that trade among Central American countries, which represents around 25 per cent of the sub region’s exports, is concentrated in essential products, such as agro-food and pharmaceutical products. y

Meanwhile, South American and Mexican trade has contracted by -13 per cent each (similar to the regional average), and that of the Caribbean by -16 per cent, according to ECLAC.

For the first time, the report offers a special chapter on gender inequalities in international trade.

It underscores that productive and trade specialisation, combined with gender segregation in the labour market, conditions the quantity and type of women’s employment in international trade.

In 2018, according to available information on 10 South American countries and Mexico, one out of every 10 employed woman worked in sectors associated with exports, the report says.

In addition, it says women are concentrated in just a few sectors (the textile and garment industry and in some services, such as tourism), while men are distributed across all export-related sectors.

The report says, due to COVID-19, the border closures, the restrictions on movement and the drop in trade have an impact on female workers and businesswomen linked to tourism (at a regional level and especially in the Caribbean) and the for-export textile and garment industry (particularly in Central America and Mexico).

As a result, ECLAC stressed that it is necessary to strengthen regional integration and productive 'complementarity', “ensuring women’s participation in sectors that are strategic for structural change with gender equality in a post-pandemic world.”

ECLAC said it is also necessary to analyse the distributive effects of trade policies from a gender perspective and ensure regulatory coherence between trade rules and commitments to women’s human rights (CEDAW, the Beijing Platform and Regional Gender Agenda). It said it also important to determine the effects on how gender provisions are incorporated into trade agreements and disciplines; how women's access to credit, technology and employment in dynamic sectors is guaranteed; and how it affects support for the internationalisation of women-led businesses.