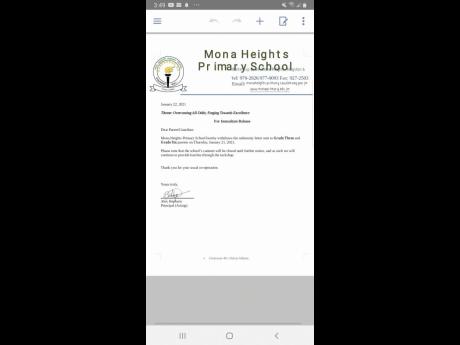 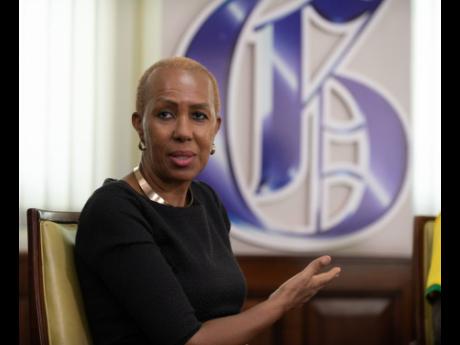 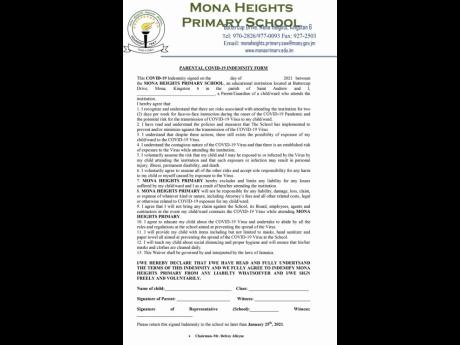 Amid the limited return to face-to-face classes in Jamaica’s public school system, some principals are quietly asking parents to sign a waiver indemnifying their institutions should students contract the deadly coronavirus (COVID-19).

But the use of indemnity forms by public schools at the primary and secondary levels has triggered an investigation by the Ministry of Education, which has sought to make it clear that this is not sanctioned by the Government.

Williams acknowledged that she has seen a copy of a letter reportedly distributed by one school asking parents to sign a COVID-19 indemnity form.

She declined to name the school during a Sunday Gleaner interview on Friday, but said the letter has been passed to Dr Kassan Troupe, acting chief education officer, who the minister has asked to lead the investigation.

Parents in possession of these letters should immediately turn them over to the ministry, Williams insisted.

One of the schools that started using indemnity forms was Mona Heights Primary, its acting principal, Alex Hepburn, confirmed.

Similar letters were sent out by “many other schools”, one principal disclosed.

President of the Jamaica Teachers’ Association, Jasford Gabriel, declined to comment for this story, saying it was the first he was hearing about the use of indemnity forms in schools.

The indemnity forms were dispatched to parents on Thursday along with a letter asking them to acknowledge the contagious nature of the virus, the risks associated with attending classes amid the pandemic, and the measures implemented by school administrators.

“I voluntarily assume the risk that my child and I may be exposed to or infected by the virus by my child attending the institution and that such exposure or infection may result in personal injury, illness, permanent disability and death,” read a section of the document, a copy of which was obtained by The Sunday Gleaner.

“I voluntarily agree to assume all of the other risks and accept sole responsibility for any harm to my child or myself caused by exposure to the virus.”

Hepburn initially defended the use of the indemnity form, even as he acknowledged that it was done with “minimal input” from the education ministry.

“We are just asking them [parents] to say if in case something happen to your child, we are not held liable in case somebody wants to sue the school,” the acting principal told The Sunday Gleaner.

“I did not speak to anyone within the legal arm of the ministry,” he admitted, while indicating that the school obtained legal advice from an attorney.

Hepburn sought to make it clear that there was no plan to turn away students whose parents refused to sign the waiver.

“No one is being unfairly treated. No one is being put in a position where they have a choice to make … So I really don’t understand the challenge,” he reasoned.

However, after he was informed by The Sunday Gleaner that the use of indemnity forms was not sanctioned by the education ministry, Hepburn promised that Mona Heights Primary would consider withdrawing them.

Minutes after the interview, he telephoned this reporter to confirm that “we are going to withdraw this letter”. By late Friday, several parents confirmed that they had been notified, in writing, that the forms had been withdrawn.

One senior attorney took issue with the use of indemnity forms by public schools and, in particular, the one crafted by Mona Heights Primary, suggesting that they could provide cover for lax monitoring of the COVID-19 measures at the institutions.

“One thing I don’t like about this is that it is absolute,” said the attorney, who reviewed the document and spoke on condition of anonymity.

“It should be predicated on the school having in place satisfactory protocols. What if the school is not following its protocols? Then they must be held liable,” the attorney told The Sunday Gleaner.

Cumberland High School, in St Catherine, resumed face-to-face classes for grade 11 students earlier this month and principal Darien Henry said there was no contemplation of requiring parents to sign a waiver.

“We have spent quite a bit of time and resources to get our school COVID compliant and we have assured our stakeholders that our institution is safe,” said Henry.

“We are about a month into face to face and we have not had any reported incident of staff members or students who have presented with any kind of illness.”

Jamaica confirmed it first case of the novel coronavirus last March and within days schools were ordered closed as part of the measures implemented by the Government to contain the spread of the respiratory ailment.

Up to Friday, a total of 14,772 persons had contracted the virus in Jamaica, with 336 deaths, according to the latest figures released by the health ministry. A total of 11,850 persons have since recovered.

But with hundreds of students, particularly in deep-rural areas, without access to the Internet or devices for online classes, the education ministry has been attempting a phased reopening of some schools under strict guidelines.

PARENTS HAVE A CHOICE

The education minister, seeking to negate the need for a waiver, cited the protocols developed and implemented by the Government, and insisted that her ministry has provided schools with a lot of information about how they should operate “in this COVID environment”.

Furthermore, Williams said checks are conducted to ensure that these standards are being maintained.

The education minister reiterated, also, that all the modalities of teaching and learning are still available to parents. These include online classes, the audiovisual modality and the learning kit modality.

“We have said repeatedly all those approaches are still available to parents and to schools. So, if your school is open for face to face and you as a parent or guardian still do not have the confidence sending your child into the environment, then we are saying please avail yourself of the other approaches available,” Williams said.