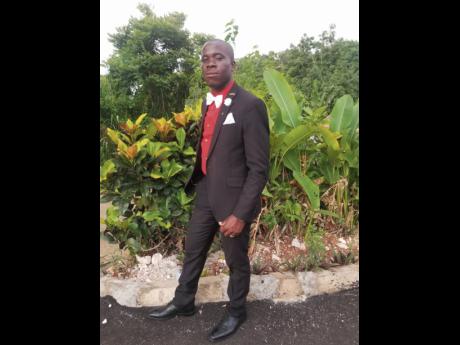 Imagine only being able to lie in one position, having your movement restricted, looking at your responsibilities staring you in the face and not being able to do much, all while enduring excruciating physical pain.

This is the reality of 34-year-old religion and theology student Marvin Pryce, who was diagnosed with a herniated disc just weeks ago and which requires immediate surgery to avoid paralysis.

“According to the report from the MRI and the neurosurgeon, I am suffering from a herniated disc in the C spine and an overgrown bone that is pressing on the spinal cord in the same area. As a result, they will have to remove the disc and replace same with synthetic ones,” Pryce told The Gleaner.

He said his woes began last October when his right hand became numb.

He said, as a landscaper, there are several strenuous activities that could have caused the pain; but the more unbearable it became, the more worried he was.

“I have been having a lot of pain for the past two years. As a result, I have been to and from the doctor. It was not until the last week in October 2020, I realised that my condition started to get worse and I was properly diagnosed December 11, 2020.”

He said his condition is at an advanced stage and he could lose all motion in his limbs if he is not able to do the surgery soon.

“Presently, I am unable to sit up even to use the toilet. I can hardly walk as moving causes me to be in severe pain. From the 11th of December 2020, I have been laying down in one position in one location. My only movement these days is to the bathroom and back.”

The husband and father of two said it will cost approximately $3 million (US$18,000) to have the surgery done in Cuba, as opposed to Jamaica where it is more expensive, but all his funds have dried up and he needs all the help he can get.

“I would need this surgery to be done as soon as possible because I don’t want to risk being paralysed. The cost to carry out this procedure in Jamaica is $5 million. But after contacting a medical facility in Cuba, I learned that I can get the medical treatment there for USD$18,000 so I think that would be best,” he noted.

As a strong believer in Christ, Pryce told Family and Religion that his ultimate wish is healing, but acknowledged that God could make a way through various means, including skilled surgeons who are divinely led.

Additionally, Pryce said atop his list of wishes is to be able to provide for his family as he is accustomed to doing.

“… As a husband and a father of two wonderful children, my financial obligations are to ensure that my family is well cared for. My daughter attends school and I am a full-time student at Northern Caribbean University. Prior to my illness, I worked to care for my family by selling pastries on campus, doing landscaping in between classes and on weekends and being a student literature evangelist. Not being able to move around or even to sit up, has affected my abilities to care for my family and even my own medical expenses.”

While Pryce is thankful to God for the assistance he has received from his Church family and others through this difficult time, he is pleading for those who are able to assist with funding his procedure to do so.

Donations can be made at https://www.gofundme.com/manage/spinal-disc-repair