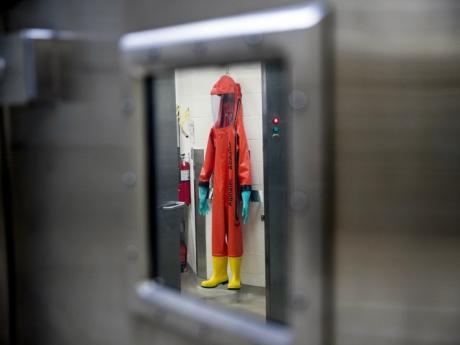 FILE - In this March 19, 2020, file photo, a biosafety protective suit for handling viral diseases are hung up in a biosafety level 4 training facility at U.S. Army Medical Research and Development Command at Fort Detrick in Frederick, Md., where scientists are working to help develop solutions to prevent, detect and treat the coronavirus. China is trying to spread doubt about the effectiveness of Western vaccines and the origin of the coronavirus as a World Health Organization-selected team of scientists are in the city where the pandemic first broke out. (AP Photo/Andrew Harnik, File)

TAIPEI, Taiwan (AP) — Chinese state media have stoked concerns about Pfizer’s COVID-19 vaccine, despite rigorous trials indicating it is safe. A government spokesperson has raised the unsubstantiated theory that the coronavirus could have emerged from a U.S. military lab, giving it more credence in China.

As the ruling Communist Party faces growing questioning about China’s vaccines and renewed criticism of its early COVID-19 response, it is hitting back by encouraging conspiracy theories that some experts say could cause harm.

State media and officials are sowing doubts about Western vaccines and the origin of the coronavirus in an apparent bid to deflect the attacks. Both issues are in the spotlight because of the rollout of vaccines globally and the recent arrival of a World Health Organization team in Wuhan, China, to investigate the origins of the virus.

Some of these conspiracy theories find a receptive audience at home. The social media hashtag “American’s Ft. Detrick,” started by the Communist Youth League, was viewed at least 1.4 billion times last week after a Foreign Ministry spokesperson called for a WHO investigation of the biological weapons lab in Maryland.

“It’s purpose is to shift the blame from mishandling by (the) Chinese government in the pandemic’s early days to conspiracy by the U.S.,” said Fang Shimin, a now-U.S.-based writer known for exposing faked degrees and other fraud in Chinese science. “The tactic is quite successful because of widespread anti-American sentiment in China.”

The state media coverage followed a report by researchers in Brazil who found the effectiveness of a Chinese vaccine lower than previously announced. Researchers initially said Sinovac’s vaccine is 78% effective, but the scientists revised that to 50.4% after including mildly symptomatic cases.