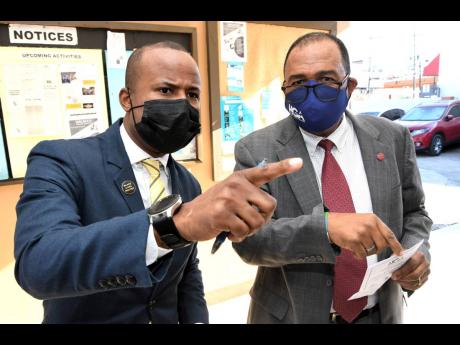 Rudolph Brown/Photographer
Press Association of Jamaica President George Davis makes a point to the Rev Dr Peter Garth, pastor of Hope Gospel Assembly, on Sunday. The organisation was celebrating the launch of National Journalism Week at a church service themed ‘Safeguarding Press Freedom in a Pandemic’.

In a staunch defence of press freedom, the Reverend Dr Peter Garth lobbied for the protection of media rights as he warned against a perceived worrying trend of influential figures seeking to silence voices with which they disagree.

He also delivered a rebuke to Bishop Alvin Bailey and like-minded religious adherents, saying that they did not have exclusive right to pronounce on controversial issues such as abortion.

“There are some powerful persons out there. Sometimes they give cards, and you can use them at places where you can sit and enjoy the beaches in Jamaica. If you say something they do not like, they sometimes ask you to turn in that card.

“The press is not for sale; the Church is not for sale,” Garth declared, adding that such institutions were too vital to the functioning of society for compromise.

Addressing the launch of National Journalism Week during a church service at Hope Gospel Assembly, Garth urged media workers to be courageous in reporting facts to the population.

Garth’s sermon referenced the recent firestorm ignited by Bailey, who called for Prime Minister Andrew Holness to rein in State Minister Juliet Cuthbert Flynn over her advocacy for abortion rights for women.

“… The Church has to think through these issues: abortion, stem-cell research, medical cloning, manipulation of the human embryo. Those are critical issues,” he said, citing artificial insemination among the suite of considerations.

“... The Church must be careful how they try to tell people that they cannot speak. ... The press must speak – we must not silence anybody,” Garth said.

It wasn’t all praise for the media at the church service, though, as the clergyman warned that not everybody who provides the information in mass media are ‘unbelievers’ who have an agenda.

“Media images are important ... and to our parents, we need to understand this because our children can so easily get their values based on media images and reports that come from media,” Garth stated.

National Journalism Week is being celebrated under the theme ‘Safeguarding Press Freedom in a Pandemic’.

Today, there will be a virtual public forum held under the theme ‘Does Jamaica Deserve its High Press Freedom Ranking?’.