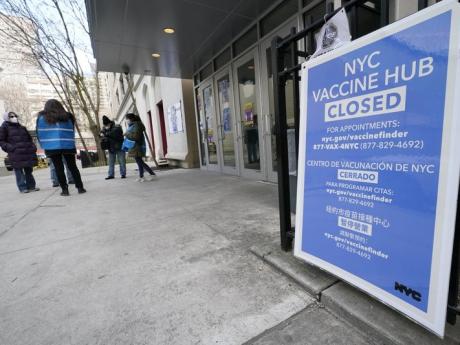 FILE - In this Jan. 21, 2021, file photo. An increasing number of COVID-19 vaccination sites around the U.S. are canceling appointments because of vaccine shortages in a rollout so rife with confusion and unexplained bottlenecks. (AP Photo/Kathy Willens)

An increasing number of COVID-19 vaccination sites around the U.S. are cancelling appointments because of vaccine shortages in a rollout so rife with confusion that even the new CDC director admitted she doesn’t know exactly how many shots are in the pipeline.

States were expected to find out their latest weekly allocation of vaccines on Tuesday amid complaints from governors and top health officials about inadequate supplies and the need for earlier and more reliable estimates of how much is on the way so that they can plan accordingly.

President Joe Biden suggested Monday that he hopes the country can soon ramp up to 1.5 million shots dispensed per day. His administration has also promised more openness and said it will hold news briefings three times a week about the outbreak that has killed over 420,000 Americans.

But for now, the setup inherited from the Trump administration has been marked by frustration, miscommunication and unexplained bottlenecks, with shortages reported in some places even as vaccine doses remain on the shelf.

Dr Rochelle Walensky, Biden’s brand-new director of the Centers for Disease Control and Prevention, was herself flummoxed over the weekend in trying to describe current supplies.

“We are at the mercy of what the federal government sends us, and right now we are able to go through it quicker than what we are receiving,” he said.

White House press secretary Jen Psaki responded by saying that Florida has administered only about half of the vaccines it has been given.

As of Tuesday morning, the CDC reported that just over half of the 41 million doses distributed to states have been put in people’s arms.

The reason more haven’t been dispensed isn’t entirely clear. Some state officials have complained of a lag between when they report their numbers to the government and when the figures are posted on the CDC website.

And while some vaccination sites have cancelled appointments for first-dose shots, many are believed to be holding large quantities of vaccine in reserve to make sure people who have already gotten their first shot receive the required second one on schedule, three to four weeks later.

Inova Health System, the largest health provider in Virginia’s Washington, D.C., suburbs, said it is cancelling all first-dose appointments at its mass vaccination clinics beginning Thursday because of inadequate supplies. Those who have already received a first dose will have their appointments for a second dose honoured, it said. Inova has administered more than 70,000 shots.

In North Carolina, Greensboro-based Cone Health announced it is cancelling first-dose appointments for 10,000 people and moving them to a waiting list because of supply problems. Also, UNC Health said Monday that the 10,000 doses it will receive this week are less than half of what it expected.

North Carolina Health and Human Services Secretary Mandy Cohen said Monday that “challenges and shortages” will persist as long as the state is “getting such a small amount of vaccine.”