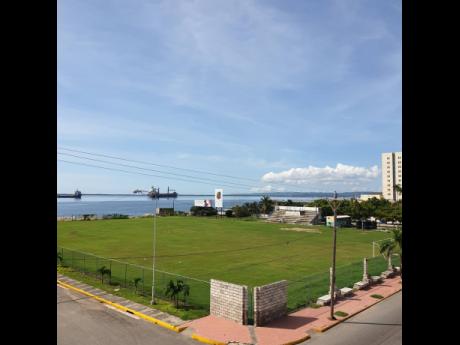 Downtown Kingston’s only true green space, the Breezy Castle Sports Centre, will be a lot greener – and even safer – for the community members and their children who use its facilities from now on. This is thanks to a $3.33-million upgrading initiative carried out by The MultiCare Youth Foundation (MYF), with support from the European Union/European Development Fund Business Support for Community Based Enterprises and Social Enterprises Project through the Jamaica Social Investment Fund (JSIF).

For the last 26 years, the Breezy Castle Centre has offered Parade Gardens children and families a safe and neutral facility for recreational activities, at no cost, in this underserved and often volatile community. With the venue and sports field often rented out for sporting, social, professional and other events, it also serves as a valuable income earner for the foundation, which operates the complex on a long-term lease from the Urban Development Corporation.

“Breezy Castle or ‘mini stadium’, as it is popularly known, has been, and continues to be, a virtual oasis for local and surrounding community members,” explains Ann Astwood, MYF administrative manager, adding:

“In addition to serving as home to MYF’s sports and other youth intervention programmes, it functions as the home ground for the Rae Town Football Club and facilitates regular use by club members, other community football, basketball and netball groups, and the Inner-City Marching Band. In fact, although the COVID-19 restrictions have temporarily curtailed use by large groups, some community members still come by individually to exercise.

Recently, however, it had become a struggle for the foundation and its caretaker to keep the field green, due not only to the extensive use of it, but also because of a defective well pump and malfunctioning irrigation sprinklers needed for adequate watering.

Another serious concern was the fact that the fencing for the property had deteriorated, and large holes had led to unauthorised entry by some, and anxiety for the safety of children who sometimes slip through on to the busy road to retrieve a flyaway ball or just for a prank.

The MultiCare Youth Foundation was therefore happy to be invited last year to submit a proposal for assistance under the Business Support for Community Based Enterprises and Social Enterprises Project. The MYF was able to point out that upgrading the Breezy Castle fencing and irrigation system would not only result in a safer and more marketable facility, it would enhance the MYF’s social intervention programming and have a direct and positive effect on the lifestyles of community members and other users. In fact, thousands would benefit directly and indirectly, including more than 3,500 children and youth who gain from opportunities created by the foundation each year through skills training and internships, life skills, mentoring and other remedial programmes.”

Celia Dillon, JSIF project manager, technical services, notes that the Business Support for Community Based Enterprises and Social Enterprises Project which has made the Breezy Castle upgrading possible is part of the Poverty Reduction Project (PRP), explaining:

“The objective of the PRP programme is to empower residents of volatile communities to achieve their fullest potential and contribute to the attainment of a secure, cohesive and just Jamaican society. The PRPIV portfolio launched a two-step call for proposals under the Business Support for Community Based Enterprises and Social Enterprises project. The first step involved the submission of a concept note which was then evaluated based on explicit eligibility criteria and objectives of a social enterprise, as well as the soundness of the proposal and how the organisation as a Community Based Enterprise and/or Social Enterprise continued to benefit the community. The MultiCare Youth Foundation’s proposal advanced easily to the second stage, having met the eligibility criteria as well as being committed to promoting youth development through training within the community they serve.”