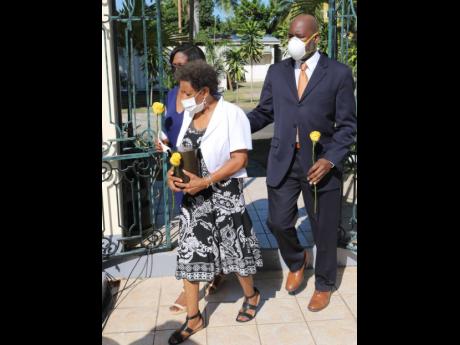 Photo by Christopher Serju
Mavis Beckford, who was married to advertising icon Gurney Beckford for 57 years, is escorted by daughter Andrea Wray and son Gavin Beckford as she carries the urn with her late husband’s remains to yesterday’s thanksgiving service at the Sts Peter and Paul Catholic Church in St Andrew.

His achievements in advertising and marketing are well documented, and Andrea Wray and Gavin Beckford used Thursday’s thanksgiving service for their father, Gurney Beckford, to point out that he was also a party animal, comedian, and true friend, but above all, he was at heart a family man.

“I appreciate the time that God gave us with Gurney Beckford. There are so many things that could have taken him away from us [earlier]. Do you know that he was a survivor of the Kendal train crash?” Gavin asked, referencing the 1957 incident. “Yes, he survived that and many other threats and challenges to his life. He had a purpose which was laid out by God.”

Gavin said that he would miss the wise counsel, jokes, lunches, and road trips with his dad, who he said embodied the sentiment that true friendship is enduring, forgiving, and supporting.

And from the many lessons shared, one still resonates with him.

“Do not be afraid of death, but recognise that it must come. Therefore, we must treasure our loved ones and savour the good times while we can. Don’t dwell on strife, but forgive and move on. If you love my father, heed this lesson and live it in his honour,” he appealed.

For Andrea, the lesson that stands out is the need to cultivate friendships and never take them for granted.

Born in Amity, Westmoreland, to Blanche Parkinson on April 12, 1937, Gurney Bastin Beckford spent his formative years with his maternal grandparents Ada and Phillip Parkinson, the village lawyer and district constable.

At Mount Hermon Elementary School, he excelled and was awarded one of six scholarships, which took him to Buxton High School, where his academic prowess was again on show, resulting in Beckford completing the four-year course within two years. He graduated with passes in all his Senior Cambridge and General Certificate of Education (GCE) examinations.

His first job was as a registry clerk at the Ministry of Finance and Planning, and after a years, he applied for tertiary studies in the United States of America and was accepted at Howard University.

He got married to his high-school sweetheart, Mavis, soon after graduating with a bachelor’s degree in business administration.

Gurney was recruited while in the US by CPV International Advertising Agency to work in Jamaica as an account executive. After two years, Dunlop Corbin Compton stole him, and thus began a 54-year relationship.

For his dedicated work in the field of advertising and his philanthropic activities with the Jamaica Cancer Society, Beckford was awarded the Order of Distinction by the Government in 2005.