PAJ to press for constitutional recognition of press freedom 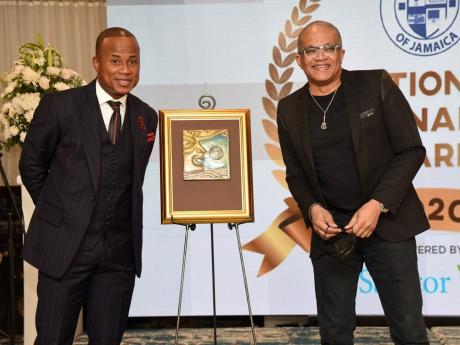 President of the Press Association of Jamaica, George Davis (left), unmasks for a photo with Gleaner columnist, Dr Michael Abrahams, who was presented the Morris Cargill Award for Opinion Journalism during the 2020 National Journalism Awards yesterday evening at the Jamaica Pegasus hotel in New Kingston. Davis says the PAJ will be batting for inclusion of press freedom in the Constitution.

The Press Association of Jamaica (PAJ), yesterday, said it will be pressing to have press freedom constitutionally recognised in Jamaica.

Speaking last evening at the 2020 National Journalism Awards at the Jamaica Pegasus hotel in New Kingston, president, George Davis, acknowledged Jamaica’s good record of respect for the press and its resulting sixth place ranking on the World Press Freedom Index, and noted that the next step is to have it included as right in the Constitution of Jamaica.

“When the next constitutional window opens that is something that we will be pushing for,” he told fellow journalists and award sponsors at yesterday evening's event.

The move would bring Jamaica up to par with some countries in the Caribbean Community, such as Trinidad and Tobago, which have entrenched press freedom in their constitutions.

Davis, however, acknowledged that while the PAJ will be batting for inclusion of the rights of the press in the Constitution, the Jamaican press largely enjoys freedom in comparison to many other countries, even within the region. Pointing to a recent raid on the Trinidad Express Newspaper by the police, which was ruled unconstitutional by the nation’s court, he noted that although press freedom is guaranteed in the Constitution there, journalists in that country have faced attacks.

He, therefore, welcomed the recent move by the Court Administration Department to institute a protocol formalising journalists’ access to the courts.

“It’s a significant development and when the media protocol is published by the team working with the Chief Justice Bryan Sykes,” he said.

“It makes no sense to quarrel how the protocol came about, the fact is the protocol is in place and we welcome it and now working with the court is going to be so much easier,” he said.