115 wards of the State excel in CSEC, CAPE 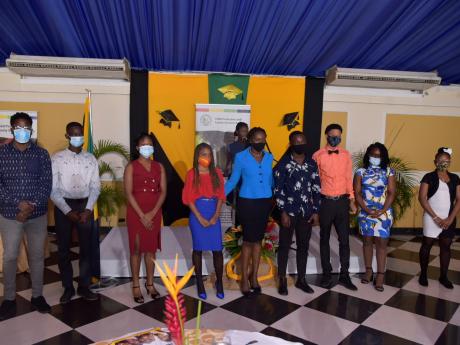 Attorney-at-law and member of the Jamaica Constabulary Force, Joy Carter (centre), who is a former ward of the state, shares a moment with some wards of the state who have been recognised by the Child Protection and Family Services Agency for outstanding achievement in the 2020 Caribbean Secondary Education Certificate (CSEC) and Caribbean Advanced Proficiency (CAPE) examinations. The ceremony was held on Friday, January 29, 2021, at the Terra Nova All-Suite Hotel in St Andrew – Contributed photo.

A record 115 wards of the State have passed four or more subjects in the 2020 Caribbean Secondary Education Certificate (CSEC) and Caribbean Advanced Proficiency (CAPE) examinations.

The students were on Friday, January 29 recognised by the Child Protection and Family Services Agency (CPFSA) during a ceremony held at the Terra Nova All-Suite Hotel in St Andrew, which was streamed to the entity’s four locations across the island.

Minister of State in the Ministry of Education, Youth and Information, Robert Morgan, in his address at the function, commended the students on their academic achievements.

“We should all be proud that so many of them have passed their [exams] and can now start a good path to becoming contributors and proper functioning members of the society,” he said, noting that the State care system must provide wards with a clear path towards success.

He reported that last year the Government spent more than $54 million on tertiary education for children in the system.

Morgan said he is pleased with the continued support from private citizens for wards of the State, especially as it relates to their educational pursuits.

Sixty tablet computers were presented to the top awardees from the CPFSA’s four regions.

The top male and female were Ainsley Rhoden and Aphrabehn Fuller, respectively, who earned nine subjects each.

Aphrabehn, in her address, encouraged the students to continue to excel.

“The road to success is never easy. However, despite all the doubts and challenges that were thrown our way, we have overcome with the support of families, friends, and the CPFSA. We the 2020 awardees have emerged the victors,” she said.

Attorney-at-law and member of the Jamaica Constabulary Force, Joy Carter, who is a former ward of the State, charged the students to use the challenges they have encountered to inspire them towards success.

“Take the positives from your experience – there will be obstacles but the only way out is to remain focused, and by the time you know it, you will become a better version of yourself. Let your yesterday be your yesterday, and your today be your today,” Miss Carter said.

Meanwhile, Chief Executive Officer of the CPFSA, Rosalee Gage-Grey, told JIS News that at the onset of the COVID-19 pandemic, there was some uncertainty as to how the children would be able to continue their schooling, but noted that they were able to make the adjustment to online learning.

“We must give kudos to the respective homes, our foster parents and our social workers, who worked with the students and were a source of motivation,” she said.

To the students, she urged them to continue towards success.

“We are saying to them, the sky is the limit. We had some powerful statements today and we expect great things from them in the nation and across the world,” Gage-Grey said.