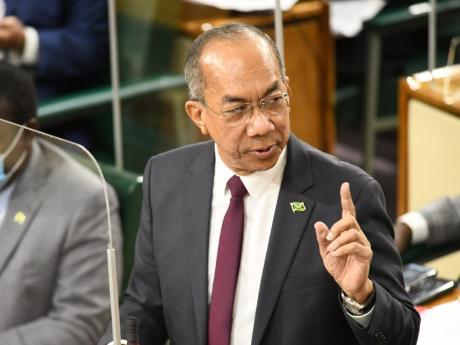 Chang acknowledged that the Government is lagging behind in its legislative agenda to use Parliament to push through reforms that could help break the wave of crime and violence across Jamaica. He says the work is being strengthened to have key reformed introduced - Rudolph Brown photo.

National Security Minister Dr Horace Chang says the Government will be redoubling its efforts to introduce key reforms that will help to tame Jamaica’s crime monster.

Chang acknowledged that the Government is lagging behind in its legislative agenda to use Parliament to push through reforms that could help break the wave of crime and violence across Jamaica.

Chang, who was addressing a range of issues in the House of Representatives Tuesday, said he has engaged the Ministry of Justice and the Attorney General’s Department to help craft and pass critical legislations.

“We have indicated clearly to the crime consensus committee that I have engaged extensively with the Minister of Justice who has responsibility for elements of getting legislation done and the Attorney General’s Department and reorganise our own policy team and we are now pushing aggressively and will ensure that those pieces of legislation will be brought to the House this year starting this quarter,” said Chang who is also the deputy prime minister.

Among the legislation on the agenda are a proposed new Firearms Act, amends to anti-gang legislation, and regulations for the Major Organised Crime and Anti-Corruption Agency.

Chang praised the rollout of the Jamaica Eye infrastructure across several townships and credited the surveillance system for being a key player in nabbing criminals who carried out savagery and were attempting to escape.

The national security minister said because of Jamaica Eye, criminals are now being caught shortly after committing crimes.

To complement the system, there has been a partial rollout of a quick response team, Chang said.

“We are in the process of introducing the quick response team in the Corporate Area despite the incidents in the last two weeks. We [are] not going to rush to put the bikes on the road. The men are being trained and they will complete their training before they are put on the road in February,” the minister stated.