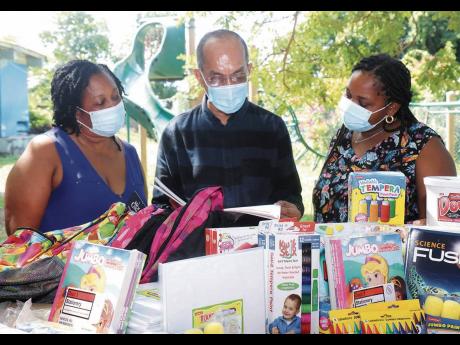 As Jamaica prepares to celebrate its 59th anniversary of political independence, National Security Minister Dr Horace Chang says self-governance does not mean freedom for the country’s young people to kill and maim each other without facing the consequences of their action.

“Freedom doesn’t mean that now that we are our own masters, we have the privilege to do what we want in any way to hurt each other,” said Chang, during his recent visit to the Caribbean Military Academy (CMA), the Flankers, St James, tertiary institution aligned to the Jamaica Defence Force (JDF). “We have to lay out the (perimeters),” the security minister said.

Thirty young men from across the 22 informal communities in St James are currently enrolled in an articulated truck-driving simulator training programme, which is being offered at the CMA, which was officially opened last December.

The training courses which commenced in January will run for five months for full-time students and seven months for part-time students. The programme costs approximately $20 million and is being funded through a partnership involving the Ministry of National Security, the HEART Trust and the Caribbean Maritime University.

According to Chang, who is also the member of parliament for St James North West, many of the country’s youths feel as if there is nothing for them to do, and have turned to a life of crime.

“Whether in Montego Bay, the Corporate Area or Westmoreland, many of them had to be removed from the school system for indiscipline and other reasons,” said Chang. “If we are going to be successful, to grow as a nation, achieve prosperity and a good quality of life for everyone, we must know that freedom comes with responsibility.

“The Jamaica Defence Force is an institution that every Jamaican can be proud of, in terms of its integrity, professionalism and a level of discipline that I think all Jamaicans respects and understand,” said Chang.

Chang also revealed that the Government is taking steps to expand the JDF’s role through semi-military training that could see those completing the training joining the country’s uniform forces and engaged in other national duties.

“It is not so much to train them in the military, but to engage them through the Jamaica National Service Corps, which we want to maintain at a good level,” said Chang.

“The Government is also looking to expand the offerings of the national service corps. We see the need, now, not only for skills training, but for character development, and the JDF, as an institution, is one of the finest in terms of orienting and developing character and offering an opportunity for our young people from challenged backgrounds,” Chang added.