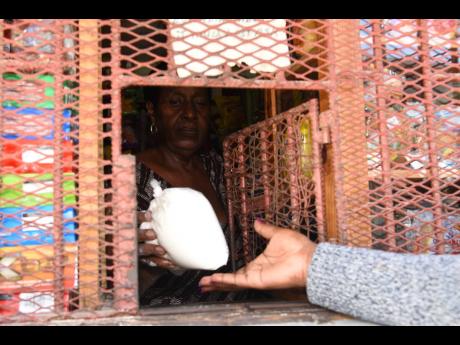 Kenyon Hemans/Photographer
A shopkeeper in Kingston hands a bag of flour weighing two pounds to a customer on Tuesday. Jamaica Flour Mills, the main wholesaler of flour in the island, has increased prices by up to 14 per cent.

The recent round of price increases announced by the Jamaica Flour Mills (JFM) on all categories of flour, cake mixes, festival mix and wheat by-products, including animal feed, was long in the making, the company’s most senior executive has said....

The recent round of price increases announced by the Jamaica Flour Mills (JFM) on all categories of flour, cake mixes, festival mix and wheat by-products, including animal feed, was long in the making, the company’s most senior executive has said.

The price of counter flour, the most widely used type in households, will jump by as much as 14 per cent. High-gluten bakery flour is climbing by almost nine per cent.

Derrick Nembhard has cited a combination of factors, including an upsurge in the global grain market, a spike in oil prices, and volatility in the local foreign market.

In announcing the increases, which took effect on Monday, February 1, JFM said it had for some time absorbed cumulative costs but had now reached the brink.

“We are at a point now where we this is no longer possible,” JFM advised clients in a letter over Nembhard’s signature.

Nembhard told The Gleaner that the increase on ex-factory price on baking flour was five per cent, while the cost for counter flour was 12 per cent. He said that keen watchers of developments on the global market would not be surprised at the hike.

“World grain prices have been going up since the middle of last year, certainly since August. They escalated at the beginning of the year when the crop report came out and therefore prices have just been going up generally.

Nembhard said the JFM understands the multiplier effect that the hike in the staple product would have on bread and other everyday baked products but disclosed that the increase was inevitable.

The JFM managing director said that the company’s grains division had been able to cushion price shocks by making purchases in the futures market. Nembhard stated in a letter addressed to clients that JFM would continue to monitor the global situation in the interest of local consumers.

“We have tried to maintain our costs as best as we can,” he said.

“Margins have been eroded for some time and now we got to the point where we had to go with the increases.”