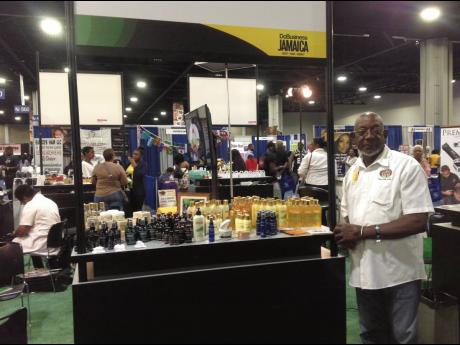 When Professor Harvey Reid suffered from frequent bouts of cold and asthma as a child, his mother would give him hot cups of fever grass (lemongrass) tea to soothe his symptoms.

Lemongrass, famous for its healing properties, not only improved his health, but inspired the University of the West Indies professor in later years to delve deeper into research of the medical properties of plants and to create his company, Country House Products.

The company started with its line of lemongrass products for health-conscious individuals, and has grown to manufacturing an impressive range of teas, bath and personal care items. The development of Country House was spurred along by Reid’s hard work and perseverance, and his constant engagement with agencies like the Jamaica Promotions Corporation (JAMPRO), the Caribbean Export Development Agency, and EXIM Bank to seek new avenues for growth.

Reflecting on his progress, Reid noted that his company has received constant support locally, winning awards and funding for various ventures. He said, “Country House Products was among the first group of 10 companies selected by the National Baking Company to be recognised as the ‘Bold Ones’ of manufacturing in 2010, and we enjoyed sponsorship to expo Jamaica in 2010 and 2018.”

Country House launched its website www.houseofnaturejm.com in 2014, opening it to a new audience, and it was also chosen to participate in the JAMPRO-led export development initiative, Export Max.

“The company benefited from an extensive coaching programme delivered by ActionCOACH Jamaica,” the entrepreneur explained in relation to the initiative. “Topics such as packaging, branding, budget, and marketing were covered. A productivity audit was carried out by the Productivity Audit Centre of Jamaica, and the company was able to respond to most of the recommendations, hence improving its overall performance.”

Country House Products was among one of five companies involved in JAMPRO and the JMEA’s Caribbean trade mission to Barbados, Trinidad, Nassau and The Bahamas in June 2018. As a result, the company gained two clients in Nassau.

The participation of Country House Products in a two-day, in-store promotion in August 2017 at Pak Cosmetics, the largest Afro-Caribbean retailer in the UK, according to Reid, was another benefit gained from the programme.

“During the visit, products were placed in five outlets,” said the professor. “Finally, Country House Products, together with seven other companies, attended the Bronner Brothers International Hair Show in Atlanta, Georgia, USA, under the JAMPRO pavilion in August 2018.”

The businessman explained that despite the end of the Export Max programme, his company has maintained a close relationship with JAMPRO as it continuously seeks to identify new local and international buyers. In November 2019, Country House Products participated in interviews with PricesMart that were organised by JAMPRO, as the large and well-known chain sought to buy local products for its 13 stores.The progress of the company, like many other business enterprises in Jamaica, was impacted by the COVID-19 pandemic in 2020, reducing sales by approximately 80 per cent due to the closure of various hotels and spas.

Rather than being discouraged, Country House Products met the challenge head-on by shifting its focus to the production of sanitising products, such as hand sanitiser and liquid hand soap. This now added a new chapter to the business, and it has capitalised on this opportunity. According to Reid, “The company has learnt to adjust to a new normal and expects to thrive going forward.”

In reflecting on the journey of Country House Products since 2005, he underscored the importance of valuable partnerships in navigating local and international business ecosystems.

His advice? “Make JAMPRO your first stop for a hand-holding experience regarding export, information on marketing opportunities, participation in trade shows, and linkages with potential clients and buyers.”

Going forward, Reid envisions an administrative and operational infrastructure for the company that can operate without his direct input, ensuring that a process of succession planning is in place. He also sees further expansion in Country House’s future; over the next five years the professor would like to increase his staff, to 15 employees, and the company’s exports. At present, five per cent of revenue comes from export, but he foresees this increasing to between 40 and 50 per cent in the next five years.

With his spirit of innovation, Country House will surely meet, and exceed, his goals.