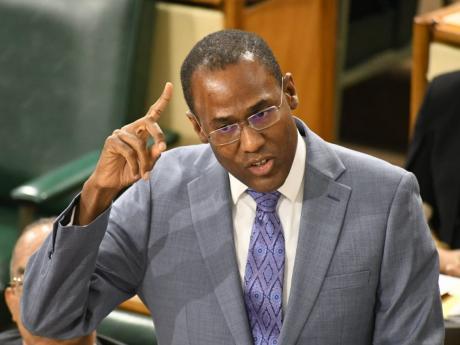 Dr Nigel Clarke noted that the COVID-19 pandemic has generated both a health crisis and an economic crisis during the current financial year 2020/21. (file photo)

The government is projecting to spend $830.78 billion to finance the affairs of the country for the 2021/2022 financial year.

This is a reduction when compared with the previous fiscal year.

For 2020/21, the government had programmed the spending of $853.83 billion, but that was slashed to $850.24 with the tabling of the third Supplementary Estimates of Expenditure in Parliament in January.

The Estimates of Expenditure tabled in Parliament this afternoon includes $776.58 billion for recurrent or house-keeping expenses and $54.2 billion for capital spending.

Finance Minister, Dr Nigel Clarke, who tabled the budget in Gordon House this afternoon, was quick to point out that the lower debt services costs and lower volume of loans to public bodies accounted for the difference in spending between the current fiscal year and the upcoming one.

Clarke stressed that the budget changes should be viewed through that lens.

The full programme to be undertaken by the Government during 2021/22 financial year will be outlined by Clarke in his budget presentation in March.

Clarke noted that the COVID-19 pandemic has generated both a health crisis and an economic crisis during the current financial year 2020/21.

He said stated that resulted in significant loss of revenue for the Government.