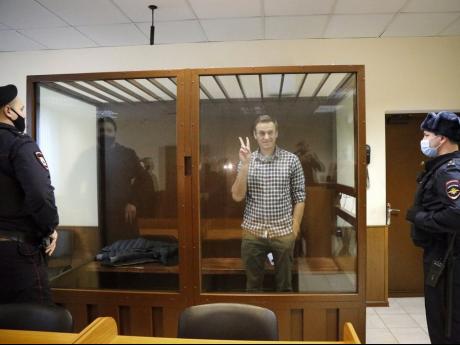 Russian opposition leader, Alexei Navalny stands in a cage in the Babuskinsky District Court in Moscow, Russia today. Two trials against Navalny are being held Moscow City Court: one considering an appeal against his imprisonment in an embezzlement case; and another announcing a verdict in the defamation case (AP photo).

A Moscow court today rejected Russian opposition leader Alexei Navalny’s appeal of his prison sentence. The rejection came even as the country faced an order from a top European rights court to free the Kremlin’s most prominent foe.

A few hours later, a judge in a separate case ordered Navalny to pay a fine for defaming a World War II veteran.

During the first court hearing, Navalny urged Russians to stand up to the Kremlin in a fiery speech mixing references to the Bible and “Harry Potter.”

Navalny, 44, an anti-corruption crusader and President Vladimir Putin’s most vocal critic, was arrested on January 17 on his return to Russia from Germany, where he spent five months recovering from a nerve-agent poisoning that he blames on the Kremlin. Russian authorities have rejected the accusation.

Earlier this month, Navalny was sentenced to two years and eight months in prison for violating terms of his probation while convalescing in Germany. He appealed the sentence and asked to be released. A Moscow City Court judge instead reduced the prison sentence to just over 2 1/2 years, deducting a month-and-a-half that Navalny spent under house arrest in early 2015.

The sentence stems from a 2014 embezzlement conviction that Navalny has rejected as fabricated and the European Сourt of Human Rights has ruled to be unlawful.

Navalny has been held in Moscow’s Matrosskaya Tishina prison, but Russian news reports said that after losing his appeal, he is likely be sent to a prison in the western part of Russia within the next few days to serve out his sentence.

His arrest and imprisonment have fuelled a huge wave of protests across Russia. Authorities responded with a sweeping crackdown, detaining about 11,000 people, many of whom were fined or given jail terms ranging from seven to 15 days.