Abandoned by her husband and forced to live in her car after being burnt out of her home and business, female farmer pleads for help 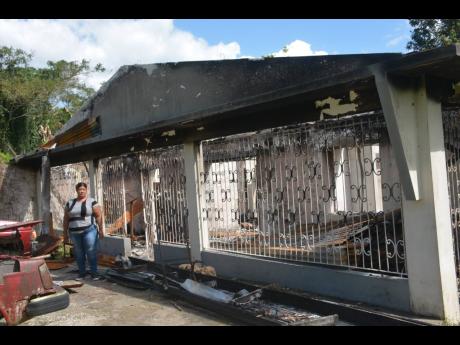 Janet Silvera
Forty-five-year-old farmer Nadine Aird of Content in Hanover has been moving from ‘pillow to post’ for the last month, after the five-bedroom house she lived in was razed in what she says was an electrical fire on January 8. 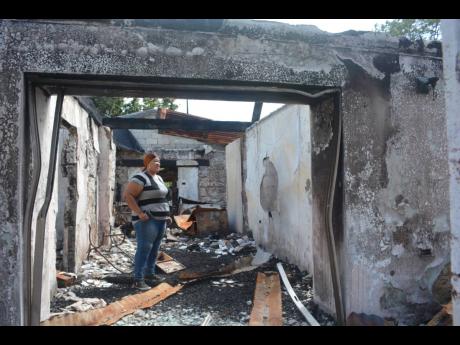 Janet Silvera
Nothing else would please Aird than getting help to put a roof over her and her two daughters’ head. 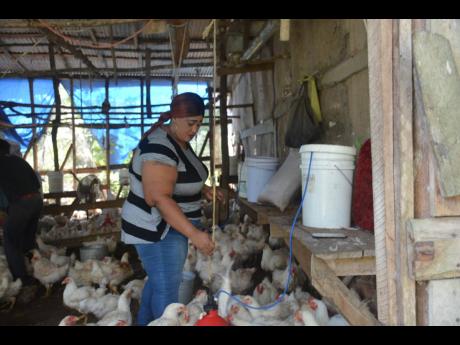 Janet Silvera
Nadine Aird in what’s left of her chicken farm in Hanover.
1
2
3

Burnt out of her home and a thriving farming business, Nadine Aird was forced to find refuge in a Toyota Crown motor car, where she slept nightly, until that, too, was taken from her.

The 45-year-old farmer of Content in Hanover has been moving from ‘pillar to post’ for the last month, after the five-bedroom house she lived in was razed in what she says was an electrical fire on January 8.

Aird, the breadwinner for her two daughters and husband of 24 years, who said she has since been abandoned by her spouse, lost all her personal items, in addition to investments such as 12 deep freezers, 12,080 pounds of chicken, 370 bags of broiler ration, 15 bags of goat feed, 25 bags of pig feed and her generators in the fire.

“I went to meet with the poor relief people to try to get help, but on my return the car was gone. I was told it was taken by my husband, so now I am staying with people who I ask to put me up tonight, and another to put me up tomorrow. I am not staying anywhere stable,” she shared.

Her daughters – one a student of Barracks Road Primary and the other at Montego Bay Community College – are a little more fortunate, as their paternal relatives have jumped in to provide accommodation for them miles away from their home.

In a tear-jerking interview with The Sunday Gleaner, Aird spoke of her husband’s reaction to the fire when she queried how they would be able to take care of their daughters who are both still in school.

“When I said to him after the fire, ‘what are we going to do?’ He said ‘I don’t know what you talking about’. I said, ‘What do you mean? How am I gonna provide for our daughters?’ He said, ‘You have always been doing the business so just go ahead and do it just the same way’.”

Originally from Santa Cruz, St Elizabeth, Aird said she built her business from scratch, using trucks to carry out wholesale and retail products. When she moved to Hanover with her husband she expanded, becoming the main source of income for her family. Her husband worked in the business helping to deliver chickens, pick up feeds, sawdust and other things the company needed.

Since the fire, Aird said her husband has stopped taking her calls, and she is now hoping the poor relief will help her with shelter, food and clothing, or anything else. She has no land title, which is a major issue, and she must present a diagram of the house and tax papers before the organisation can touch her case.

“I can’t come up with a land title, because my husband's uncle owned the house we lived in. All my papers went up in flames and I have nothing to show. All I had in my handbag was the last tax receipt. Nothing else,” she said.

The woman, who has never been on the receiving end, was among the first to donate over 2,000 pounds of chicken to children’s homes when COVID-19 hit Jamaica last year, said when business dried up and her chickens were dying from hunger, she did what was right.

But even before the virus hit, Aird was visiting various charities, giving back to homes such as Noah’s Ark, Granville Children’s Home, Father’s House and the infirmaries. She would collaborate with the Rural Agricultural Development Authority (RADA) whenever they had projects in need.

She has also provided funding for several children attending school, and taken a lot of children from off the streets after they left home to fend for themselves. “Even when my husband was frowning, I took them in,” she said.

A woman who played the role of the man in her house, Aird raised goats, reared pigs and planted crops such as bananas, pumpkin and pepper, which she did herself.

“I don’t only depend on who work for me. I plant my plantain, I do my tomatoes, I plant my cabbage, you name them,” she said.

The two men who have remained steadfast in support of their boss, although she is unable to pay them, spoke glowingly of her strength and drive to succeed.

Damion Henry, who has worked with Aird since 2008, has not left the burnt-out property since the fire. “I will not leave her alone, even when there is nothing to put in my pocket,” he told The Sunday Gleaner.

His loyalty to his boss knows no boundaries, he admitted. “Mi know she has the courage and she has the understanding and the ability to rise again and I want to be a part of that and mi know she can do it,” Henry declared.

His co-worker, Paul Fowles, who has also not earned a dollar since the fire, said he is not leaving Aird.

“Sometime you can’t watch the money, cah money is not all,” he said.

Both men are convinced that the good Aird has done providing for those in need over the years will return to her tenfold.

“She has done so much due to donation and so forth, no matter how small it is,” they concurred.

As present as her two staff members are in her life, Aird remains sad, almost lost, and in disbelief, because she has no shoulder to cry on, with her husband deserting her at this time when she needed him most. Her parents are both dead and she doesn’t have any family members in the community where she lives.

Nothing else would please Aird than getting help to put a roof over her and her two daughters’ head.