Don’t treat us like this! - Former sugar workers seek help from SCJ 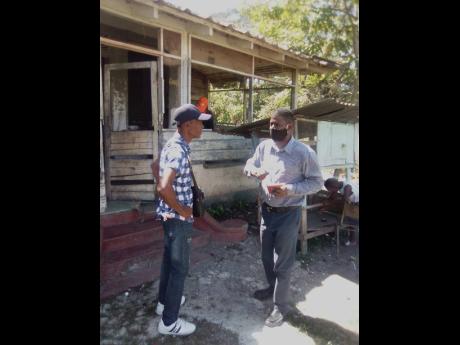 THIRTY families still occupying sections of the Innswood Estate property lands that have been sold to private interests are seeking assurances from the Sugar Company of Jamaica Holdings Limited (SCJ) that they will not be forced off before they are given proper housing where they can be relocated.

The residents, who are former sugar workers at Innswood, in their complaints to The Gleaner said that they have been told by persons representing SCJ that they will be forced off the property soon because the owners want the land to expand their agricultural holdings and other businesses.

Odette Mills, 45, who was born on the property, said that she has been working alongside her parent on the sugar plantation for a number of years, and she was told that there are no plans to give them proper housing.

“Mi work inna mud and water, chop cane, spray cane, and throw fertiliser. Now sugar shut down and dem sell the land and don’t want to give us somewhere to live. This is not justice,” she declared.

Continuing, she said, “Mi nuh want them do mi like what dem do up the road on Saturday (demolished 15 family homes). Furthermore, mi have mi shop here, and this is how I eat food. So them will have to pay me for my business and all the fruit trees that we plant over the years,” she said.

Seventy-one-year-old Hubert Wynter, who has worked in sugar for over 40 years, said he is disappointed with the treatment they are receiving from SCJ.

“Nobody come talk to us, so we don’t know when they will come to move us. Right now, they cut off the light and water to force us out without giving us somewhere to live,” he told The Gleaner while admitting that he is living on edge.

“After Innswood shut down, mi still live on the property, and people from the office over there take mi name and said I was suppose to get a house, but until now,” said 70-year-old Cyril Fearon.

“Mi now homeless because the owner of the piece of land where mi house was come to me and say him want the land to put him business, so mi haffi move,” Fearon told The Gleaner, adding that he now stays with a friend who only accommodated him because they thought he would have got the house he had been promised already.

SCJ Holdings Limited last week refuted claims that it was being inconsiderate when it demolished 15 family homes at Innswood Estates.

In a release, SCJ Managing Director Joseph Shoucair said that the state-owned company had exercised due process and that the demolition was a last resort after the families failed to vacate the land so that it could be handed to the new owners as agreed.

The SCJ said that it first notified the residents of its plans for the development of the land in 2014, and after a number of meetings, an agreement was reached for SCJ to help the families relocate to Ebony Park.

Meanwhile People’s National Party Caretaker for St Catherine South Central Kurt Matthews and caretaker councillor for the Sydenham division Sheridan Hibberts both met with the residents last Thursday to assure them that the opposition would l leave no stone unturn to ensure that they are treated fairly.

“It is customary for sugar workers who have worked all their lives on these plantations to be compensated with proper housing in communities where they can live with dignity. The Government must have a heart and do what has been done for displaced sugar workers over the years,” he said.

“We are demanding transparency, equity, and a reasonable timeline when these residents will have to go,” he continued.

Matthews said that right now, the residents are living on edge not knowing what will happen to them.

“They have severed both light and water as a means to force them out, so the SCJ must find a solution for these residents, bearing in mind that the persons who have purchased the lands are expecting to start their developments also,” he said.