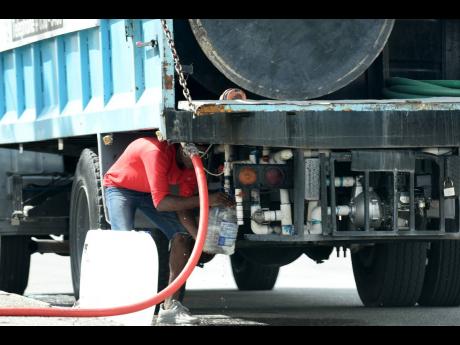 Concerned about the frequency of drought in the parish, councillor Dawnette Foster, who represents the Cornwall Mountain division in the Westmoreland Municipal Corporation (WMC), is reprimanding some of her senior colleagues for not ensuring that the area is adequately served with its own water trucks.

Foster, a member of the Jamaica Labour Party (JLP) minority and the only female councillor at the WMC, is charging that instead of looking to third-party avenues to transport water, the WMC should invest in more than the sole water truck in its possession.

“We have one truck here now, we should have two trucks. We have senior members here who should ensure that we have trucks to truck water to the people,” she said in taking a jab at the People’s National Party (PNP) majority, which primarily consists of long-serving members.

According to Foster, the current method in getting water to residents across the parish is counter-productive as the corporation is left on bended knee year after year at the mercy of the local government ministry.

“We don’t want to be coming here every year with the same problem, begging for water money,” said the councillor in defending her call for the WMC to get more water trucks. “We go through a period of drought every single year, and every time we come here, we call on the minister [Desmond McKenzie], begging for funding for water. We need to move away from that.”

In response, Danree Delancy, the deputy mayor of Savanna-la-Mar and councillor for the Bethel Town division said that even with another water truck, the corporation would still have to depend on the ministry for funding to cover the heavy demand for water distribution.

“I keep saying that Jamaica does not have a water problem. We have a water-distribution problem, and to have water properly distributed, it is a policy decision, and that policy comes from the central government,” said Delancy. “Yes, we need trucks, but even with those, we are still going to need money to pay for the water and to maintain the trucks, and all that.”

Cebert McFarlane, the councillor for the Leamington division, expressed support for more water trucks but believes that the blame should not be directed at the WMC but instead at the government and the National Water Commission (NWC).

“The council by itself could have bought a truck a long time ago, but because the ministry has placed more than a 400-metre hurdle in the way of the council purchasing a truck, we have not been able to do so,” said McFarlane. “We also know that for us to be able to purchase a water truck, the NWC has to approve it.”

According to McFarlane, if governance issues at the central government level are not ironed out, municipal corporations will continue to remain dependent on the will and wishes of a minister of local government.

“The council itself cannot be placed at fault for not having a truck. Central government is what is making it difficult for local government. Even if we get two trucks, we still will be here asking for water money, and we still have to go through that layer of bureaucracy to serve the people,” he added.