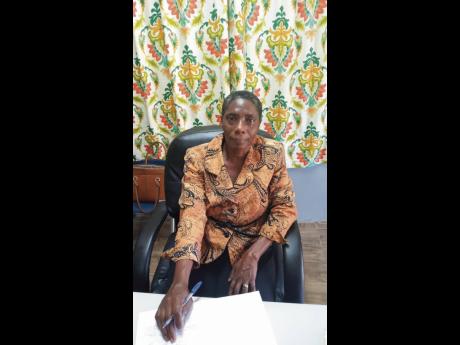 LILLIETH ROYAL Wright, principal at Simon Primary and Infant School in Rock River, Clarendon, is ecstatic about the “miracle” stimulated by charity that was sparked by one woman’s benevolence.

With the restrictions placed from maintaining the COVID-19 protocols, she said the school, which has been around since 1968, has had great challenges.

Wright said there was inadequate bathroom facilities as the pit latrines were abandoned due to termite infestation, as well as for safety reasons.

“A proposal which was put to the municipal corporation to build a new toilet facility, because the school is an emergency shelter, is still in the pipeline,” she shared, adding that there is a toilet facility which was built by the Jamaica Social Investment Fund and contains three cubicles for the females and two for males.

“This is shared by staff and students, and having a population close to 50 and 10 staff members, it has become very difficult and unhealthy,” she pointed out.

Explaining that the infants cannot be accommodated at the school as a result of the current set-up, she said her dream is to have restrooms built for the infant department and staff.

With the huge challenge staring at her, Wright was inspired to have a tag drive and seek sponsorship from past students as well as others who were willing to support.

The drive led her to Veronica Campbell of Mac Glass Hardware in May Pen, Clarendon.

“The ticket was exchanged for a donation of $1,000. She changed her mind and took back the money and instead donated a toilet set,” a grateful Wright shared.

However, her ‘miracle’ was not finished as she said Campbell contacted her a few days later, saying that herself, along with a donor who resides in Canada – Joseph Thompson – would donate six additional toilet sets.

Just when Wright thought she had ‘maxed out’ donations, Campbell again called to say that Thompson’s parents, who reside in Montego Bay, donated $145,000 towards the project.

An elated Wright told The Gleaner that in spite of the economic downturn due to the COVID-19 pandemic, she is so happy people are still willing to reach out and help others.

And while she is happy with the project that is near completion, she said the bigger dream is to construct a section entirely for the infants with their own playground and other amenities.