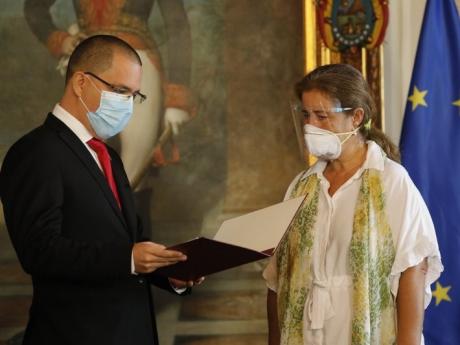 “The circumstances of aggression leave no option” due to “disrespect for public international law” and in accordance with the Vienna Convention on diplomatic relations, Arreaza said in a statement after a meeting with the European diplomat in the capital, Caracas.

“We do it because there are already 55 decisions, of what they call sanctions in the European Union or in the US system, as if they had a moral authority, which they do not have, nor legal, to impose any punishments on citizens of any other country,” Arreaza said.

The Venezuelan government action came two days after the European Union’s foreign ministers sanctioned 19 Venezuelan officials, freezing their assets and banning them from travelling to the bloc, citing the deteriorating situation Venezuela faces after the December 2020 elections. The main opposition parties boycotted those elections.

So far, 55 Venezuelan officials have been sanctioned by the European Union.

“The individuals added to the list are mainly responsible for undermining the electoral rights of the oppositions and the democratic functioning of the National Assembly and for serious violations of human rights and restrictions on fundamental freedoms,” the EU ministers said.

It is the second time in almost eight months that Brilhante Pedrosa has been declared persona non grata and ordered to leave Venezuela. Both cases have been related to the EU sanctions against officials and allies of Maduro.

Last June, Brilhante Pedrosa was able to remain in Venezuela after the European Union high representative for foreign affairs, Josep Borrell, and Arreaza agreed on the need to maintain diplomatic relations to “facilitate the paths of political dialogue.”

Arreaza on Wednesday lamented that the sanctions were imposed again, saying Maduro had been “generous” to allow European diplomats to remain after many nations formally recognised opposition leader Juan Guaidó as the country’s rightful leader.

Guaidó, former president of the National Assembly, declared himself interim president in 2019 and was recognised by 60 countries as the legitimate leader of Venezuela, arguing that Maduro’s reelection in 2018 was fraudulent. Among the countries that recognised Guaidó were Spain, France, the United Kingdom and Germany.

Maduro has repeatedly accused the European nations and the United States of trying illegally to force him from power.

Arreaza on Wednesday delivered protest notes to the ambassadors of France and Germany, as well as to the heads of mission of Spain and the Netherlands. The Venezuelan government accused those countries of orchestrating the new sanctions.

European Union spokesman Peter Stano urged Venezuela’s government to reverse the ouster of Brilhante Pedrosa, saying it “will only lead to further international isolation of Venezuela.”

“Venezuela will only overcome its ongoing crisis through negotiation and dialogue, to which the EU is fully committed but which this decision undermines directly,” he said.

Hours later, Maduro said in a televised appearance that “the European Union is welcome in Venezuela” as long as it is respectful and the Europeans “rectify” their position.

Without that, there will be no “kind of dialogue, gentlemen of the European Union,” he added.

Venezuela is mired in a deep political, social and economic crisis attributed plummeting oil prices and to two decades of mismanagement by socialist governments in the oil- country. Venezuela has been in recession for years. Millions live in poverty amid high food prices, low wages and four-digit inflation.