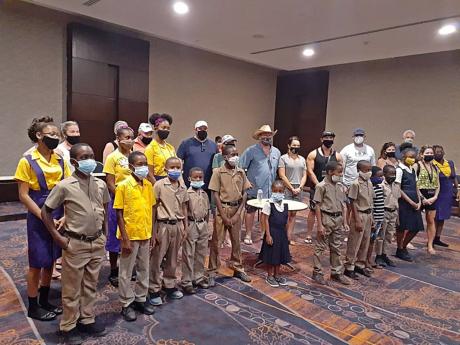 Contributed
Students from Walkerswood Academy and representatives from IB Roof Systems pose for a photograph at Moon Palace Jamaica after the handover.

In addition, five care packages were donated at random to Moon Palace Jamaica staff from various departments. The total cost for the packages was over US$3,000, with the items being purchased from local Jamaican wholesalers.

“When the idea of preparing care packages for children of St Christopher’s, Walkerswood and Parry Town was presented, both our team and the Palace Foundation worked diligently to make it a reality,” said Jason Stanley, chief executive officer, IB Roof Systems.

“We were honoured to be a small part of providing these care packages to these children and their families,” he added.

“Many of the parents who accompanied the students to collect the care packages expressed their heartfelt joy and gratitude at being selected to receive this gift,” Boreland said.

And according to Boreland, Stanley was so moved by his experience that he gave each family taxi fare to go back home.

For over 40 years, IB Roof Systems has been a leader in providing high-performance PVC membranes and systems for the commercial and residential industry, installing hundreds of millions of square feet.

The 17-year-old Palace Foundation has assisted several causes locally over the years, with the aim of solving social problems, by giving back to its community as much as possible.