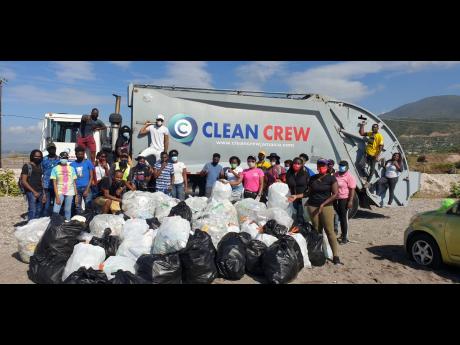 Contributed
RCOK team members share a photo moment with volunteers before loading the Clean Crew truck with some 85 bags of plastic and other waste collected in a 200-metre radius. 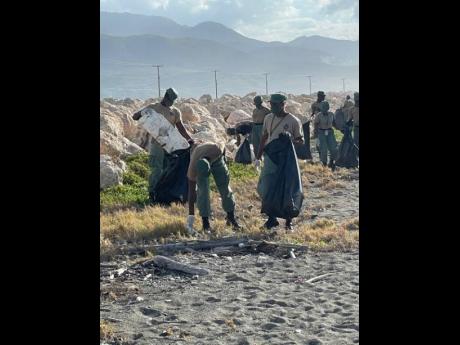 Contributed
Members of the National Service Corp of the Jamaica Defence Force collect plastics and other waste from a section of the Palisadoes. 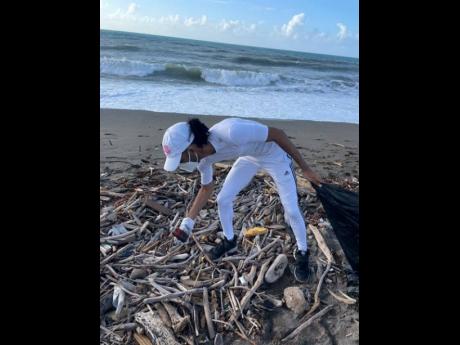 Contributed
President of the Rotaract Club of Kingston, Wade Edwards-Green on the clean-up trail.
1
2
3

IN KEEPING with its mandate to promote environmental enhancement and sustainable development, the Rotaract Club of Kingston (RCOK) this past week partnered with members of the Jamaica Defence Force’s (JDF’s) National Service Corps and Clean Crew Jamaica to host a series of coastal clean-up initiatives at the Palisadoes tombolo and its environs.

The first in the series was hosted on Ash Wednesday (February 17), where some 60 bags of plastic and debris were collected in a 200-metre radius.

The team, with reinforcements from the Rotaract Club of St Andrew, was out again on Sunday (February 21), where another 85 bags were filled.

“We were really alarmed at the number of garbage that accumulates in such a short space of time,” said Toni-Moy Stewart, director of community services at the RCOK.

“We thought Sunday would’ve been a lighter day or we could at least tackle a brand new area, but when we arrived, it was as if nothing had happened just four days prior,” she added.

Major Raymond Warren, acting commanding officer of the 10th Battalion, Jamaica National Service Corps, JDF, heard about the initiative through club president, Wade Edwards-Green, and felt it was a meaningful way for members of his battalion to give back to the nation by improving the conditions of Jamaica’s shorelines.

“It was a pleasure to be a part of the clean-up initiative with such an energetic, good-natured group of young people, volunteering their time and energy for the good of the environment and our country,” said Gary Masters, chief executive officer for Clean Crew Jamaica.

For Edwards-Green, while these are positive efforts, more needs to be done from a policy level, to improve the island’s waste management and recycling practice and reduce pollution.

“As an organisation, we are committed to being a catalyst for environmental sustainability by educating ourselves on climate change, raising awareness, and then partnering with key figures to promote ecosystem restoration,” he said.

“Our discussions with ecological organisations and policymakers, as well as our scheduled beach clean-ups, turtle releases and coral reef gardening initiatives, allow us to be informed and then have the opportunity to act. We hope that our efforts will inspire others, and our partnerships will allow for sustainable and meaningful impact in our communities,” he added.

RCOK has hosted four beach clean-ups in the past three months and collected more than 200 bags of plastic and debris. The next beach clean-up will be on Sunday, February 28, beginning at 7 a.m.