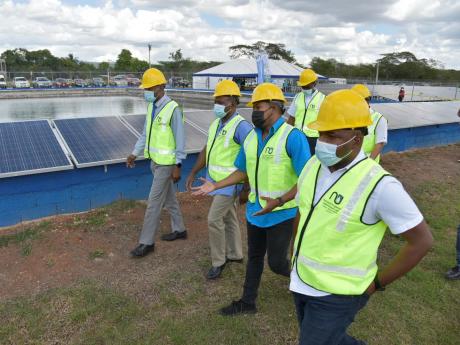 Speaking at the ceremony on February 24, Green reported that the National Irrigation Commission (NIC) solar retrofitted system will self-generate 75 per cent of the required energy for the pump station, resulting in a 43 per cent or $4.8-million annual reduction in operational costs for its service to 172 farmers in the area.

He pointed out that the project is one of five solar systems that have been completed by the NIC, which is a “deliberate intention to increase its use of renewable energy and limit environmental pollution”.

“We expect that there will be reduction in carbon emissions by 145 metric tonnes,” the Minister said.

He told the audience that the Government is on a move to ensure that “our irrigation systems” are environmentally friendly and cost-effective, as they are “critical to agriculture” and can be a major force to mitigate the effects of climate change.

Green said there must be continuous improvement to the country’s water management systems, incorporating renewable energy.

The Minister said another irrigation system to serve 795 farmers in the parish, under the Southern Plains Agricultural Development Project, is now at the completion stage, adding that there are other drives to decrease the impact of climate change, and to improve irrigation and rainwater harvesting systems.

“This project stands at the heart of what we are doing for agriculture, to ensure that we modernise and are efficient and sustainable,” he said.

For his part, Member of Parliament for South West Clarendon, Lothan Cousins, who is also the opposition spokesman on Agriculture, said he welcomed the upgraded system, and is looking forward to this model being replicated across the island.