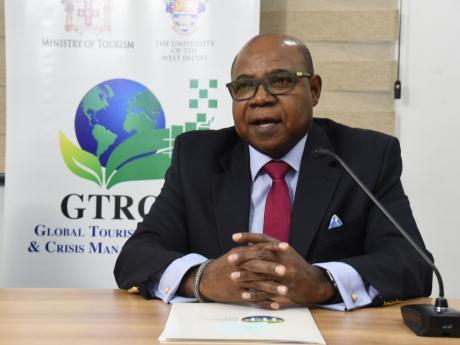 Minister of Tourism, Edmund Bartlett has called for a fair and united approach to the global distribution of COVID-19 vaccines, amid growing criticism worldwide, that advanced countries are hoarding supplies of vaccines, while poor countries are not being given access to the life-saving medication.

Bartlett said this further threatens the economic recovery of tourism-dependent states and the global economy overall.

The Minister vented his concerns while speaking on Wednesday during the latest installment in the Edmund Bartlett lecture series, hosted virtually by the Global Tourism Resilience and Crisis Management Centre. The session was held under the theme: Restarting Economies Through Tourism: Vaccine Politics, Global Priorities and Destination Realities.

While welcoming the roll-out of COVID-19 vaccines globally, Bartlett lamented that “there is great disparity in the global distribution of vaccines. The picture that is emerging is that advanced countries appear to be largely rejecting a united approach in favour of reinforcing inequalities on the basis of national citizenship.”

He also emphasised that “while the US and mostly other wealthy nations have begun to intensely vaccinate their citizens against COVID-19, generally, developing countries, home to billions of people, have yet to even receive vaccine supplies. In fact, nearly 130 countries had not yet delivered a single dose of vaccine to their combined population of 2.5 billion people. The current inequitable distribution of vaccines also means a greater risk of mutations that defy existing vaccines.”

He maintains that the implications of this approach are dire.

The Minister explained that with more than 45 million confirmed cases and more than one million deaths, countries and territories throughout the Americas, particularly the poorest among them, are experiencing an unprecedented health, economic and social crisis.

“Tourism-dependent economies have lost 12 % of their GDP compared to global economic contraction of 4.4 %. Tourism export revenues were down globally between US$ 910 billion to US$ 1.2 trillion in 2020. Between 100-120 million jobs in travel and tourism were sacrificed in 2020,” Bartlett added.

He outlined that tourism is the engine of growth in the Caribbean and its prolonged disruption spells catastrophe.

“Our economies are badly bleeding and need to be thrown a lifeline. The current situation facing these economies, as well as others across the world’s developing regions, can only be described as a humanitarian crisis,” Bartlett expressed.

In pointing to the solution to the problem, Minister Bartlett said “access to vaccination among these countries needs to be improved rapidly. We cannot afford to politicise responses to the crisis at hand. I am thus using this opportunity to urge that we prioritise tourism-dependent economies for vaccination.”

He also expressed deep concern at the relatively slow pace of vaccination across the globe, which further compounds the situation. “At the current rate of daily global vaccination, approximately 6.53 million doses, it will take roughly 5 years to cover 75% of the population with a two-dose vaccine, according to Bloomberg research. This current lethargic pace has to be dramatically hastened, as global economic recovery efforts cannot wait five years, especially among the worst affected economies,” Minister Bartlett said.