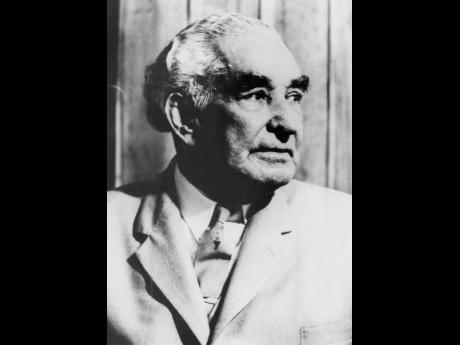 Yesterday’s event to mark the 137th birthday of National Hero Sir Alexander Bustamante at his birthplace at Blenheim, Hanover, lacked the usual fanfare as the ongoing COVID-19 pandemic forced a low-key event.

Traditionally, the event would see hundreds of Jamaicans, including schoolchildren, gathering for upwards of two hours to pay tribute to the first prime minister of independent Jamaica, who was born William Alexander Clarke on February 24, 1884, and who changed his surname in 1944 to Bustamante.

Yesterday, only a handful of invited guests attended the one-hour ceremony under strict COVID-19 protocols. The event was streamed live on the website of the Jamaica Cultural Development Commission (JCDC), which earlier, had announced that this year’s event would be significantly shortened with the wreath-laying as the highlight.

In delivering her remarks, Davis lauded Bustamante as “a man of many firsts”.

“He is a founding father, a man of many firsts. You heard? He founded the trade union (BITU); he founded the Jamaica Labour Party; he was our first prime minister, like I am the first female MP for Western Hanover,” said Davis

“More importantly, Bustamante rose from humble beginnings, and from an even humbler parish, to ascend to the highest office in the land. He shaped the destiny of an entire country,” added Davis.

Davis went on to call on the people of Hanover to follow Bustamante’s footsteps to unlock their potential and play their part in guiding Jamaica along a pathway of development.