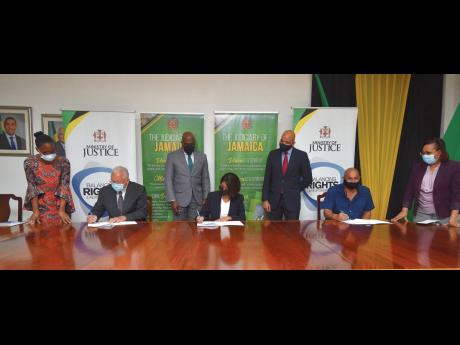 With a $90.87 million price tag to rehabilitate the St Ann Family Court in St Ann’s Bay, Justice Minister Delroy Chuck has demanded of contractor Stephen Chung of Contraxx Enterprise Limited to not only deliver on time, but to also ensure that a first-class facility is delivered come October.

The scope of the work to transform the facility includes retrofitting and internal renovation of a two-storey reinforced concrete building, establishment of a fit-for-purpose family court facility to include courtrooms and judges chambers, a private courtroom, office spaces, outfitting of bathroom and lobby area, child-friendly waiting room and holding areas, access staircase and associated external works.

“This, Mr Stephen Chung, is a part of efforts to provide first-class facility to Jamaica; and I’m saying to you Mr Stephen Chung that not only for you to complete it on time, but we want a job of which when we open, we can be proud,” Chuck directed the contractor at Wednesday’s virtual signing.

“We want not only value for money, we want a first-class facility. We want a court here that not only resembles what has been done in the Supreme Court and Court of Appeal, but surpasses it. When people come to the courthouses they must say wow!” the minister added.

He said the idea of a first-class justice system is to have first-class facilities and that is his aim as minister of justice.

“Within a short space of time, we want family courts in all the parishes,” Chuck disclosed.

And while demanding of the contractor, Chung urged Chief Justice Bryan Sykes to ensure that court facilities are maintained, reminding that repairs can be done as they are needed, rather than waiting for a massive renovation.

“We’re going to urge and insist that the court facilities are maintained. Because in all sincerity, I believe that maintenance is our best investment to ensure that all our facilities are top-class,” Chung stated.