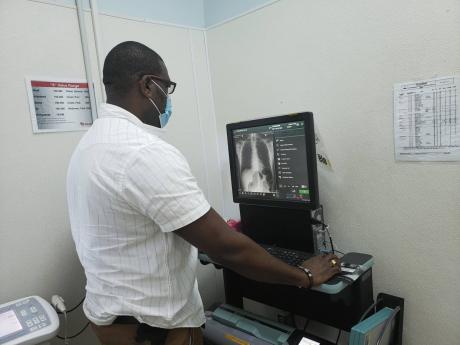 With the under-restoration Cornwall Regional Hospital (CRH), in Montego Bay, St James, now struggling to regain its footing following the 2017 noxious fumes issue, the Falmouth Hospital in Trelawny is steadily stepping up to fill a crucial void in health services in Jamaica.

The hospital status was significantly boosted recently when the Sheona Muschett-led Friends of the Falmouth Hospital donated a $15 million Picture Archiving Communication System (PACS), making Falmouth the only facility under the umbrella of the Western Regional Health Authority (WRHA) with this crucial piece of equipment.

Orville Anderson, the manager of Medical Imaging at Falmouth Hospital, says the PACS equipment has lifted the hospital’s capacity to serve to another level. CRH had a PACS but it has been non-functional for quite some time.

“Before we got the system, our budget for films and chemicals was $5 million annually. With this system, the budget for digital imaging and maintenance supplies is $1 million. An immediate $4 million saved,” said Anderson.

“It reduces the radiation dose to patients. More effective diagnostic images are produced … it cuts down on patients’ waiting time. With this piece of equipment, we should be moving from servicing 5,000 patients per year to 14,000.”

An official at The Ministry of Health, who spoke with The Gleaner on condition of anonymity, emphasised the important role the PACS is performing in western Jamaica.

“At Cornwall Regional Hospital the one there needs to be repaired. It is not fully functional. That makes the one at Falmouth critical to the kind of health care we deliver here in the west.”

According to the official, the ministry is warm to the idea of the Falmouth hospital becoming technologically equipped as it is now.

“Five other hospitals have the equipment, Princess Margaret was the first, then came Linstead, Port Antonio, Annotto Bay, and St Ann’s Bay. A budget is being prepared to digitise the whole Radiology Department throughout the country. Hopefully, 2021-2022 will see us integrating all the hospitals,” the official told The Gleaner.

Dr Leighton Perrins, the senior medical officer at the Falmouth Hospital, was also quite elated with having PACS capability.

“Falmouth is going in the right direction in this technological age. Images can be saved and sent via email to a radiologist, who can give an accurate reading. Falmouth does not have a radiologist but the PACS affords us to act as if one was on board here,” said Perrins.