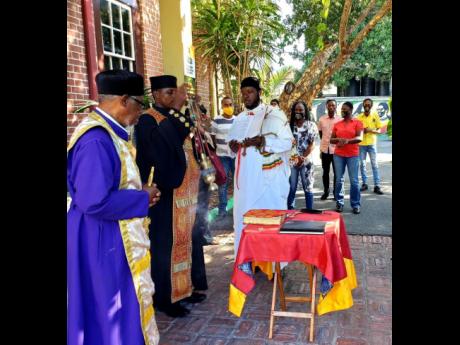 Contributed
The Head Ethiopian Orthodox Administrator, Komos Archimandrite Abba Gebreyesus Woldesamuel Negatu (centre) conducts prayer services at the Bob Marley Museum on the anniversary of Bob Marley’s birth, as other members of the Ethopian community in Jamaica look on.

The Consulate of Ethiopia in Kingston honoured the life, musical achievements and the legacy of Bob Marley on the 76th anniversary of his birthday.

The honorary consul for Ethiopia in Jamaica, Yodit Hylton, and members of the Ethiopian community visited the Bob Marley Museum to pay respect and tribute to Bob Marley.

“I grew up listening to Bob Marley’s music in Ethiopia as a child and we all loved Bob Marley. I was greatly influenced by the message of his music and we dreamt of Jamaica as a welcoming paradise island for Ethiopians,” Hylton said.

She said Bob Marley’s connection to Ethiopia and Africa was not just as a great musician, but also his love, respect and admiration for Ethiopian Emperor Haile Selassie I and Africa.

“We in Ethiopia remember Bob as always lifting up our flag and holding up the hand of Ethiopia on the international reggae music stage,” Hylton said.

Bob Marley, she said, “will always be remembered for his contribution to the pan-African movement in helping to meet the challenges of Africa and the diaspora in the 21st century through his music. For this and other reasons, Marley has earned the great respect and love of African people as a freedom fighter in the struggle for liberation and development of the people from the continent. Therefore, it is important that as admirers of Bob Marley’s music and philosophy, Africans everywhere always celebrate his life and achievements.”