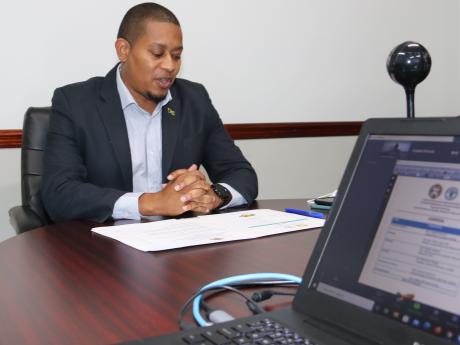 Minister of Agriculture and Fisheries, Floyd Green, addressing a training workshop on the ‘Rapid Multiplication of Turmeric through the Single Bud Technology’ on February 25, 2021 - Contributed photo.

The Jamaica Agricultural Commodities Regulatory Authority (JACRA) is to embark on a 20-acre turmeric pilot project as part of efforts to increase the growth and development of the turmeric industry.

Minister of Agriculture and Fisheries, Floyd Green, who made the disclosure, informed that best agricultural practices will be utilised among stakeholders to move the commodity along the value chain.

“Our goal is to ensure that turmeric becomes one of Jamaica’s prime export crops,” Green was quoted as saying in a statement issued today by his Ministry.

Green was delivering remarks at a virtual training workshop hosted by JACRA, in collaboration with the Food and Agricultural Organization (FAO) of the United Nations, on the ‘Rapid Multiplication of Turmeric through the Single Bud Technology’ on February 25.

The training, which was attended by farmers and personnel from the Rural Agricultural Development Authority (RADA) and the Ministry, represents another segment of the approach by JACRA to facilitate the development of the turmeric industry.

This follows the completion of the value chain analysis and the business model for the industry, which sought to address the challenges and showcased opportunities for the industry.

Turmeric is in high demand from fresh exporters and local processors and has an annual demand of over 2,500 metric tonnes with a 65 per cent profit margin per cycle under favourable weather conditions.

Green lauded the FAO for its assistance in the completion of the business assessment.

Meanwhile, Chairman of JACRA, Wenworth Charles, in his remarks, said that a public-private partnership is important to achieve the maximum and sustainable development of the turmeric industry, especially in the training of the single bud technology.

He informed that over the next five years, JACRA’s goal will be to provide some 60 per cent of the local demand for turmeric and invited organisations like RADA, universities and colleges, farmers, and other stakeholders to work together for the rapid multiplication of turmeric.

FAO Representative for Jamaica, the Bahamas and Belize, Dr Crispim Moreira, for his part, said the training represented the infusion of new technological innovation and partnership.

“Over the past four years, the FAO has shared vital technology in the region to help increase the potential of the spice commercially. This knowledge has been crucial to increasing production, promoting sustainable agriculture, and being a vital part of industrial development,” he said.

Moreira informed that come December, the FAO intends to increase the national turmeric production by 25 per cent and to increase yields by 100 per cent.