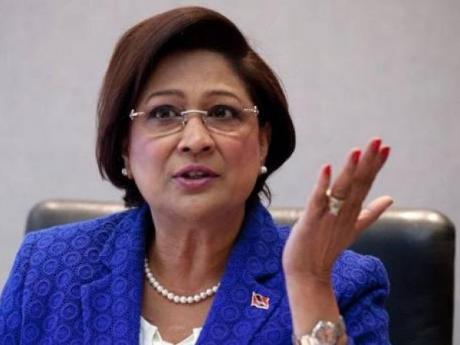 PORT OF SPAIN, Trinidad, CMC – Minister of Foreign and CARICOM Affairs, Dr Amery Browne has expressed disappointment at Opposition Leader Kamla Persad-Bissessar for what he said was an inappropriate approach to the Prime Minister of India for COVID-19 vaccines.

“This Leader of the Opposition has chosen to sacrifice protocol and good judgment and to tamper with sound bilateral relations in a quest for relevance and attention,” Browne said in a media release on Monday.

Persad-Bissessar, in a February 23 letter, asked India’s Prime Minister Narendra Modi for a gift of COVID-19 vaccines. India last month provided 100,000 doses to Barbados, 2,000 of which were shared with Trinidad and Tobago.

Although saying her country was grateful for that donation, Persad-Bissessar noted that the population of the twin-island republic was about 1.3 million and the country was reeling from the challenges of COVID-19.

“Over the last two weeks, we have repeatedly asked the Government of Trinidad and Tobago to reach out to your government for assistance. Honourable Prime Minister, it is my respectful view that it is only with your direct, timely intervention and generosity that we may be able to combat the pandemic’s challenges at present. In this regard, I respectfully appeal your kind consideration to donate AstraZeneca COVID-19 vaccines to protect my fellow citizens,” Persad-Bissessar wrote to Modi.

However, Minister Brown said the Opposition Leader had contacted the Indian leader even after the public was informed that Prime Minister Dr Keith Rowley had written to him requesting vaccines.

“The decision by the Leader of the Opposition to try to insert herself into a matter of ongoing government-to-government communication must be seen for what it is – an attempt to position herself to claim, in retrospect, that her letter was the one that achieved any particular outcome,” he said in his statement.

“Almost every public statement on COVID-19 offered thus far by the Leader of the Opposition has been made in complete defiance of modern science and reality. On the heels of the World Health Organization’s praise of our nation’s ongoing success in fighting the COVID-19 pandemic, it is unfortunate that the Leader of the Opposition has now chosen to disregard protocol between states as well.”

Jamaica’s Minister of Foreign Affairs Senator Kamina Johnson Smith also said India was sending a gift of 50,000 doses due to arrive in the coming days.