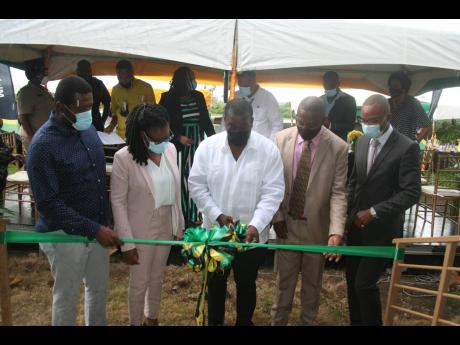 Brian Miller
Minister of Transport and Mining Robert Montague (fourthleft) cuts the ribbon to mark the official handing over of the upgraded Negril aerodrome, Looking on (second left) is Member of Parliament of Hanover Western, Tamika Davis, and officials from the Airports Authority of Jamaica.

Savanna-la-mar Mayor Bertel Moore is calling for the Negril Aerodrome to be brought up to international standards so that international flights can be accommodated at the facility.

While bringing greetings last Thursday at the official handover of the aerodrome, which was recently upgraded at a cost of J$47 million, Moore, who is also the chairman of the Westmoreland Municipal Corporation, expressed hope that the facility can attract enough business to warrant international recognition.

“In the near future Minister (Montague), I would like to see this aerodrome become a half-way international airport, it has the tenacity to really achieve something. This is Negril, and Negril is moving along, and it is moving along for a long time now,” said Moore.

The improvement work carried out on the Negril Aerodrome involved the resurfacing of its 660-metre runway and the building of a fire station on 1,000 square feet of space, containing all the necessary fa cilities. According to Montague, work is to be carried out on an additional 151 meters of runway at that facility in the near future.

“It’s only a pity, and I must say it’s a pity because COVID-19 has slowed down things at the present time (in Negril), but I assure you and I tell you this, that Negril is one of the tourism mecca of Jamaica at the present,” said Moore, in pushing his argument for a change in the status of the aerodrome.

Tracing the history of the development of Negril, which has emerged from being a sleepy seaside town to one of Jamaica premier tourism centres, Moore sadi he wants to see Negril realise its fullest potential and believes the aerodrome will ultimately play a key role in the town’s future.

Montague, who made the official handover of the newly-improved facilities, said additional improvements are to be carried out on aerodromes across the island.