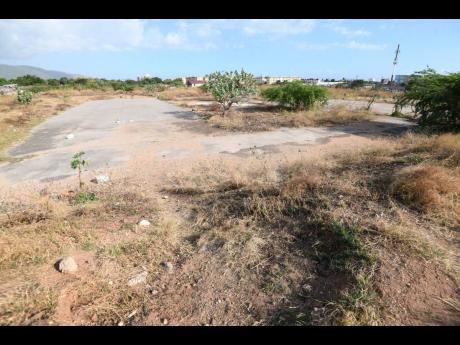 Ricardo Makyn/Chief Photo Editor
A section of No Man’s Land in southern St Andrew, where the Police Plaza is to be built.

The COVID-19 pandemic has placed a spoke in the wheels of plans to commence construction on a new police headquarters in No Man’s Land in southern St Andrew.

National Security Minister Dr Horace Chang said that the project, which was pitched as a key plank in the renewal of downtown Kingston and surround communities, will be delayed by at least a year.

“We were planning on doing something significant this year, but it cannot be done,” Chang said last week during a Gleaner Editors’ Forum.

He confirmed that the planning and design were already done, but said that the project is now at a stage to be approved for implementation by the Ministry of Finance.

Proposed projects are submitted to a project implementation unit at the finance ministry, where their viability is tested and budget is scrutinised, “so, in terms of public expenditure, you don’t fall apart halfway through,” the security minister explained.

The purpose-built police headquarters is expected to boost safety in the streets of the capital city, where six homeless people were attacked in the dead of night in late January.

In addition, it would result in huge savings for the Government, slashing the US$3 million in rent that the Government is now paying annually for office space across the Corporate Area.

Police Plaza – as the project has been dubbed – will sit on approximately 37.5 acres. The sprawling complex will cater to some 2,500 police personnel, including offices for the commissioner of police and the cadre of top brass. The plaza will host several police departments, including the Centre for the Investigation of Sexual Offences and Child Abuse.

It will also have landscaped green spaces for community members to enjoy, as well as basketball and netball courts, a football field, an Olympic-size Mondo track, a cricket ground, concert lawn, and an amphitheatre.

It is not clear where the money will come from to fund the project when it eventually gets off the ground, but up to 2019, the National Housing Trust and the Urban Development Corporation were being eyed as agencies capable of providing resources for the project.

“The entire new town centre is a project which I know the Government is looking financing for on a public-private basis, and that will provide us a sound foundation for further development,” Chang stated then.