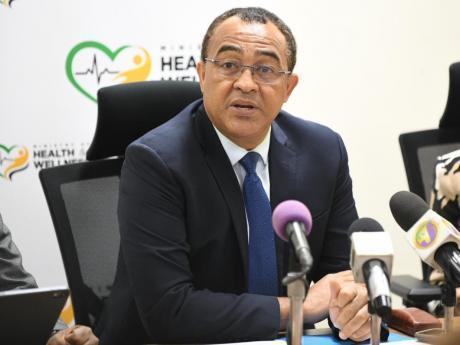 Over 5000 government officials will be among the first group of Jamaicans to be given COVID-19 vaccines.

The first batch of vaccines is expected to arrive in the country this week, to kick-start phase one of the vaccination plan.

At least two sections of the plan indicate that the 5,599 government officials will be vaccinated before close to 16,000 health care workers in March, but permanent secretary in the Ministry of Health and Wellness, Dunstan Bryan has since clarified that efforts to vaccinate both groups will be done at the same time.

More than 247,000 Jamaicans are being targeted for vaccination in the first phase, between March and April, with 46,653 persons being targeted in March alone.

The targeted 174, 987 elderly persons will not be vaccinated until April.

Health Minister Dr Christopher Tufton has defended the decision to inoculate government officials as a matter of priority.

“It is important to recognise the role [of] government - in the widest sense, upper house and lower house, the three arms of government, executive, legislature and judiciary. As you know the judges are a part of that process, they are important to the normal functioning of the society. There are a lot of decisions that have to be made, that they will have to make. They preside over that process of governance,” he said.

Those within this group will include the Governor General, members of parliament, senators, the heads of government ministries, judges, parish councillors and a number of public sector officers.

The country is expected to receive some 14,400 doses of the AstraZeneca vaccines through the COVAX facility and another 100,000 through the private sector in March.

An additional 600,000 doses, including 100,000 doses of the Moderna vaccine will be secured in April, while another 110,000 doses of AstraZeneca will be received through the COVAX facility in May of this year.

This means Jamaica will receive a total of 974,800 doses of vaccines over the next three months.

The mandate is to identify and source overall four million doses of vaccines by March 2022, to inoculate at least 65 per cent of Jamaicans.

A public call will be made for persons to make an appointment based on their priority group. Persons will need to apply for an appointment five days before their desired date.

Appointments will need to be made through the Health Ministry's website or via the call centre – 1-888- 663-5683, at a health department or regional health authorities.