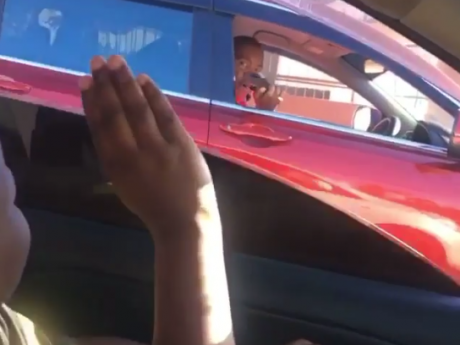 The woman claimed that his action was prompted by road rage. However, the firearm holder is disputing the series of events.

The woman claimed that his action was prompted by road rage.

In an interview with THE STAR newspaper, Tameika Nelson stated that she and her children were travelling along a section of Hope Road, in the vicinity of the Waterfalls entertainment venue, when a man in a Honda CRV drove in an aggressive manner, almost causing her to crash.

Nelson claimed that the man drove her down and then told her to wind down her car window.

"So me grab me phone, because me a say this man must up to sumpn why him a drive me down. Me see the man pull out a gun and a say, 'Gwan chat nuh and see if me nuh shoot you in ah you face'," she told THE STAR.

"Is like a God make me did take out me phone and a video, because maybe that's why him even drive off."

In the video, a boy in the left-front passenger seat of Nelson's car, who she said is her son, is heard crying, "No sir, no sir, please. Mommy, just stop nuh."

However, the firearm holder is disputing the series of events.

In a statement to the FLA, which was obtained by The Gleaner, the businessman claimed that it was Nelson who manoeuvred her car in an aggressive manner, resulting in him temporarily losing control of his SUV.

He also claimed that Nelson’s vehicle drove across the road into his path as if the vehicle was trying to force his SUV off the road.

Noting that he was a licensed firearm holder, he said he pulled his weapon from his waist with it still secured inside the holster, held it in the low ready position, while trying to assess what was happening.

The businessman asserted that the driver of the other vehicle, which he said was heavily tinted, wound down her window a little, then he heard a voice making remarks which frightened him and his family, who were in his vehicle.

“I know that this particular area is well known for motorists being held up and robbed on many occasions, and I know, personally, of persons who have been forced to stop their vehicles in similar circumstances, who end up being robbed and killed,” he said.

“I was so frightened at this point, because I believed that this driver intended to do me and my family serious harm. I raised my firearm to the level of my vehicle’s window while it was still in its holster, I did not remove the firearm from the holster, as I could not see who was inside the white car and my driver-side window was still wound up, with the white, tinted car beside me with its windows up as well. Suddenly, the left-front passenger window of the white car started to come down. I still had my firearm at window height inside my car. I rolled down my windows immediately as well, so I could see clearly who was inside the car and what was their intention, as I needed to have a clear line of sight to properly assess the situation in order to make a decision in protecting my life and that of my family,” stated the gun owner.

He said the driver of the white car began hurling several loud expletives at him.

He said subsequent to this, he realised that the occupants of the other vehicle were no threat to him at this point so he lowered his firearm, rolled up his car windows and tried to drive away from her as best as he could despite the traffic.

“At no point during the incident did I use my firearm in a manner to intimidate anyone. I only removed my firearm and raised it up inside my vehicle because of the threat I perceived at the time. The firearm was still inside the holster throughout the entire incident,” the businessman stated.