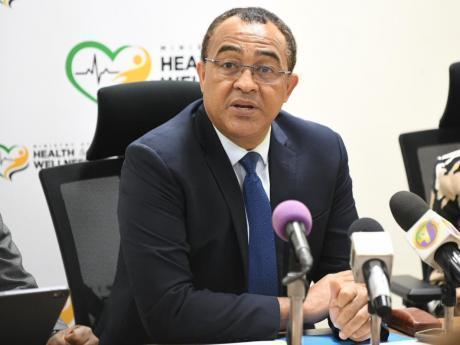 The Government has provided further details on the administration of the first phase of COVID-19 vaccination in Jamaica.

The country is to receive its first shipment of the vaccine on Monday, March 8 - a few days later than the March 4 arrival date that was previously announced.

In a statement today, the Ministry of Health and Wellness said in keeping with global standards, the priority demographic group for access to vaccinations across any population are those persons who are likely to suffer a serious health event or death if infected by the virus.

"This vulnerable group is generally accepted to be the population 60 years and older and those with comorbidities. However, in practical terms, the frontline medical and health personnel are at the highest risk of exposure and would be vaccinated first before other groups," the health ministry said.

It added that the implementation of Jamaica’s vaccine strategy, given the initial limited supply, will see medical and health personnel, including doctors, nurses and other health professionals estimated at 16,000 who have expressed an interest in receiving the vaccine, being vaccinated first.

This process is slated to begin shortly after arrival of the vaccines in Jamaica.

"Later in the month, and after the vaccination of medical and health personnel would have already begun, members of the Jamaica Constabulary Force and the Jamaica Defence Force along with persons in the 60 and older age group will gain access to vaccines. This will account for the supplies projected to be received in March," the ministry said.

It noted that in April, as additional stocks arrive, vaccination of the 60 and older age group will continue with the addition of the Jamaica Fire Brigade, Department of Correctional Services, Jamaica Customs Agency and Passport, Immigration and Citizenship Agency and workers in educational institutions at the Early Childhood, primary and secondary levels.

"The Government has also included a category of public sector workers who interface directly with the public in the course of service delivery. These would include our cashiers, customer service agents, transport inspectors, JUTC bus drivers and conductors, case officers and other such personnel. This group is approximately 5,000 persons."

Government officials, to include members of parliament, the judiciary, parish councillors, senior civil servants and senior technical officers will gain access to vaccines after the priority groups listed above.

Persons in this group who are aged 60 and older with comorbidities may seek to get vaccinated with the general pool of age 60 and older, the Ministry said.