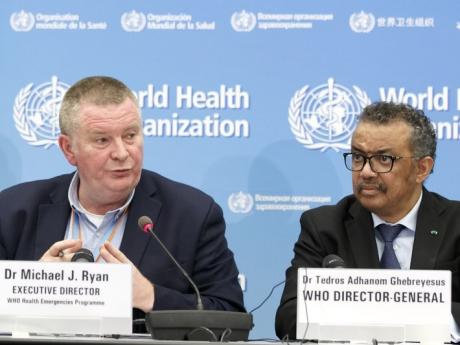 FILE - In this Monday, Feb. 24, 2020 file photo, Michael Ryan, left, Executive Director of WHO's Health Emergencies programme, next to Tedros Adhanom Ghebreyesus, right, Director General of the World Health Organization (WHO), addresses a press conference about the update on COVID-19 at the World Health Organization headquarters in Geneva, Switzerland. (Salvatore Di Nolfi/Keystone via AP, File)

GENEVA (AP) — The head of the World Health Organization called Friday for patent rights to be waived until the end of the coronavirus pandemic so that vaccine supplies can be dramatically increased, saying these “unprecedented times” warrant the move.

At a press briefing, WHO chief Tedros Adhanom Ghebreyesus said countries with their own vaccine capacity should “start waiving intellectual property rights” as provided in special emergency provisions from the World Trade Organization.

“These provisions are there for use in emergencies,” Tedros said. “If now is not a time to use them, then when?” He said the WHO would be meeting soon with representatives of the industry to identify bottlenecks in production and discuss how to solve them.

The Associated Press found factories on three continents whose owners say they could start producing hundreds of millions of COVID-19 vaccines at short notice if only they had the blueprints and technical know-how. But that knowledge belongs to the large pharmaceutical companies that have produced the first three vaccines authorised by countries including Britain, the European Union and the U.S. — Pfizer, Moderna and AstraZeneca. The factories are all still awaiting responses.

Tedros commended AstraZeneca for sharing its COVID-19 vaccine technology with companies including the Serum Institute of India, but said “the main disadvantage of this approach is the lack of transparency.”

Pharmaceutical companies that took taxpayer money from the U.S. or Europe to develop inoculations at unprecedented speed say they are negotiating contracts and exclusive licensing deals with producers on a case-by-case basis because they need to protect their intellectual property and ensure safety.

Tedros noted that although the U.N.-backed effort known as COVAX has delivered vaccines to more than 20 countries this week, the amounts are only enough to protect about 2% to 3% of each country’s population.