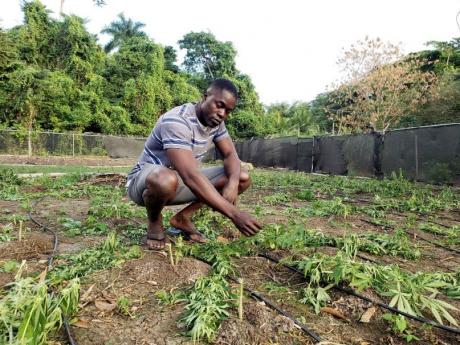 Royan Harris, a member of a Rastafarian faith group, surveys a destroyed marijuana field in Dumfries, St Thomas. He alleges that the narcotics police wiped out the crop despite his pleas that the faith group had a sacramental right to cultivate weed.

The St Thomas man who has accused the police of wrongfully invading his home and destroying his ganja farm in Dumfries is to appear before the parish court in Morant Bay on Friday, March 12.

The date was set after Royan Harris was charged on Tuesday with possession of, dealing in, and cultivating marijuana.

Speaking with The Gleaner on Thursday, Harris, who has accused the police of being malicious, questioned why no arrests were made on the day of the raid.

According to him, despite numerous checks made by him at the police station, no information on the raid or a warrant for his arrest was available, until now, two weeks later.

“Last Thursday night I was called by someone from Narcotics expressing interest to speak with me. He called back and told me to bring my attorney with me.

I had an appointment on Friday so the meeting was rescheduled. My attorney wasn’t available on Monday so he said Tuesday morning. After speaking with the attorney we went over there at 12 (midday).

He (policeman) said he was in a meeting discussing the matter. It took them three hours to discuss how to proceed because they didn’t know what to do. When I went in, he told me he wasn’t going to ask me any questions and that he’s not going to oppose bail but that he’s going to charge me and if I say anything he’s going to have to write it down. He said he’d charge me for the stuff that he found on my roof and across the field. I didn’t say anything at all to him,” Harris shared.

Harris, though bald-headed, continues to defend that he has the right to grow ganja based on the amendment to the Dangerous Drugs Ac in 2015 to allow members of the Rasta faith to cultivate marijuana on designated lands.

“The priest in charge, Mr Williams, was also there in the building and he (policeman) told him to wait outside. He had no interest in speaking to him or reviewing the documents he had brought with him.

“I don’t have a full understanding of how these things work but if it’s an ongoing investigation like they claimed, why was the first course of action to destroy the field? Secondly, for an ongoing investigation, why wasn’t the church contacted? And when I went in for questioning, the priest presented himself with whatever documentation he had and he expressed no interest in him. I can’t understand.”