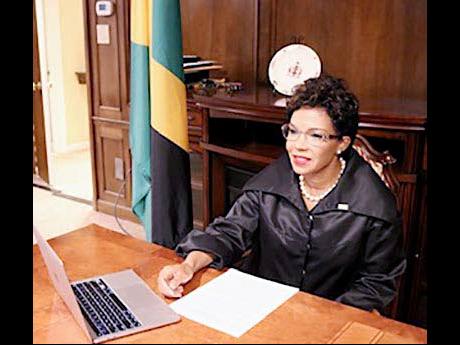 “I am always uplifted and inspired at the remarkable contribution of members of the Jamaican and wider Caribbean diaspora to the economic, social, cultural and political landscape of the United States. From the classroom to the boardroom, from the corporate world to the hallowed halls of Capitol Hill and now to the White House, our nationals have demonstrated that “we likkle but we tallawah”, said Ambassador Marks.

She was addressing a Black History Month forum put on by the Jamaican Nationals Association of Washington, DC, on Sunday, February 28, to spotlight the contribution of the Caribbean diaspora to the United States, which, according to the US Census bureau, in 2017 amounted to some eight million persons.

While the rationale for migration has evolved over time, she said, migration has remained constant, “hence Black History Month cannot take place without recognition of the myriad contributions of our nationals to the progress in the United States”.

She pointed to the contribution of Pan Africanist Marcus Garvey, Jamaica’s National Hero who was one of the first leaders of the civil and human rights movement in the United States.

“In the early 20th century, he was an advocate for the social, political and economic independence for people of African descent around the world. Much of what we have achieved is grounded in the foundation laid and the course charted by this beloved national hero,” she said.

“Reggae music, which is widely recognised as the “heartbeat of the world”, is Jamaica’s gift to humanity; for many decades soothing many weary, suffering souls and lifting the spirits of millions in their struggle for liberation, helping ordinary people to rise and overcome their challenging circumstances.

“Reggae became a voice for the voiceless and represented hope for the hopeless. As the Caribbean diaspora, like so many across the world, seeks to come to grips with the tremendous loss and suffering occasioned by the COVID-19 pandemic, it is my hope that we will find solace in our music and, like Bob Marley says, “feel alright”, “ she concluded.