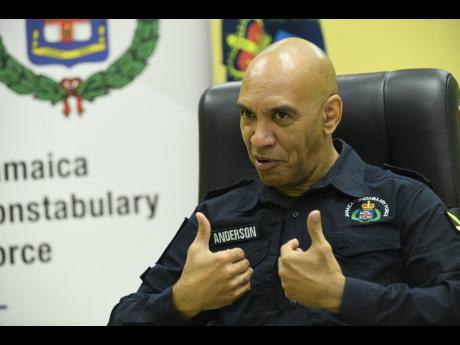 Major General Antony Anderson will continue as commissioner of police for at least another three years as the Office of the Services Commissions (OSC) continues to face criticisms for refusing to disclose the top cop’s employment contract.

“I expect that his contract will be renewed on or before the date of expiry,” confirmed Professor Gordon Shirley, chairman of the Police Service Commission (PSC), the body responsible for recommending appointments for the senior leadership of the Jamaica Constabulary Force (JCF).

Anderson was appointed on an initial three-year contract on March 19, 2018, and its renewal is hardly surprising, given the support of the private sector and statements from the Holness administration.

Aside from not knowing the salaries paid to the army head-turned-commissioner, it is not clear whether there were specific performance-related clauses in the contract and, if so, how they have been evaluated.

Shirley said the PSC meets with Anderson on a monthly basis to, among other things, “routinely review the administration of the force”.

“Additional meetings have been held with the commissioner to formally review the performance of the force and his role as head of the organisation during the past three years,” added Shirley.

On February 24, the OSC, under whose oversight the PSC falls, advised The Sunday Gleaner that it denied its access to information request for the contracts and compensation packages of Anderson and officers at the senior level below him, tax commissioner Ainsley Powell and permanent secretaries, on the basis that they were private.

Civil society groups and the parliamentary Opposition have demanded a reversal, arguing that taxpayers have a right to know how much they are paying public servants, as well as the terms of employment to ensure greater accountability in performance.

Prime Minister Andrew Holness has since said that “the public should know”, although there may be “legal hurdles” to clear, adding that Attorney General Marlene Malahoo Forte is to address issues that may be stopping the disclosure of the documents.

Nothing has come from the attorney general so far, but in the latest statement from the Holness administration, National Security Minister Dr Horace Chang told Parliament that a process may be under way to have the contracts made public.

“Discussions will be held and we’ll see how we can proceed. I’m not going to give instruction like this in public space,” Chang told a parliamentary committee last Wednesday.

Chang, who is also deputy prime minister, said his ministry has “no objection” to releasing the documents, even as he insisted that the decision was taken by the OSC, which is headed by Chief Personnel Officer Jacqueline Mendez.

“We don’t normally instruct the Services Commission how to handle these contracts,” Chang continued, in response to questions from Julian Robinson, the opposition spokesman on finance.

“I suspect that you’re aware that individuals taken on contract laterally – that means they come from outside the ministries – are usually paid on a different scale from people who rise through the system, … but I don’t think that’s a valid enough reason to stop it being shown.”

A separate body, the Public Service Commission, which is also under the OSC’s supervision, recommends the appointment of key civil servants such as the tax commissioner and permanent secretaries.

That commission is chaired by Alvin McIntosh.