‘Baby of the family’ killed in Duncans Pen 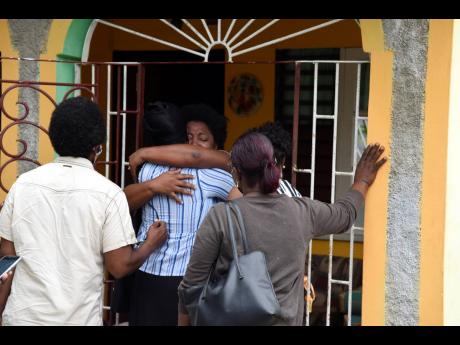 Nicholas Nunes/Photographer
The family of 24-year-old Cody McLaughlin mourns his death at the family home in Duncans Pen, St Catherine. 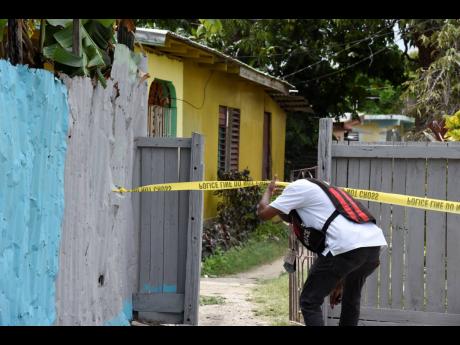 Nicholas Nunes/Photographer
An investigator enters the yard where 24-year-old Cody McLaughlin was gunned down in Duncans Pen, St Catherine.
1
2

As gun violence continues to plague the parish of St Catherine, the latest victim to die at the hands of gunmen is Cody McLaughlin of Duncans Pen in Spanish Town.

McLaughlin, a construction worker, was shot at his home about 9:30 a.m. Sunday and was taken to the Spanish Town Hospital, where he was pronounced dead.

Reports are that the 24-year-old had an altercation with another man while playing football at a field near his home.

It is reported that McLaughlin, who lived with his grandmother, immediately left and went home but was visited shortly afterwards by the man with whom he had had the dispute. The man and another attacker allegedly beat him at the door to his room situated at the back of the house.

McLaughlin allegedly grabbed a machete to defend himself when one of the men pulled a firearm and opened fire, hitting him in the chest.

His grandmother, Ethel Long, told The Gleaner she was inside the house when she heard the explosion.

“After I heard the shot, I heard Cody say, “Suh you shot me, bro,” and then I saw him stagger backwards and fall inside his room,” Long said, while recounting the sequence of events.

“I didn’t stop to see anything else I immediately hurried through the gate. I was more frightened than anything else. I went back after I saw the crowd going toward the back of the house where Cody’s room is,” she recalled.

Long described her grandson as a hard-working and jovial person who always tried to avoid trouble.

His mother, Patricia Henry, who was visiting from overseas, was dumbfounded by the tragedy,

With tears in her eyes, she said: “He is the baby of the family. He is the last of my three children. I can’t described my feelings right now.”

McLaughlin is the second family member to be killed by gunmen. In 1997, his uncle was also gunned down in Spanish Town.

He is the sixth person to be killed by gunmen since February 14 between Spanish Town and Portmore.

The St Catherine North police are carrying out investigations into McLaughlin’s death.