The ebb and flow of the Negro River 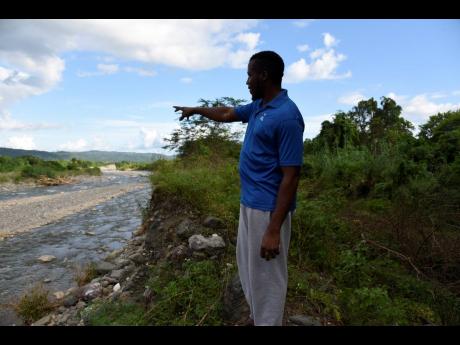 Nicholas Nunes/Photographer
Kashane Grossette said that if the rain that pelted the island late last year had continued to fall heavily, Danvers Pen in St Thomas, would have experienced serious flooding resulting from the overflowing of the Negro River.

Residents of Danvers Pen, St Thomas, are wary of the Negro River which they say poses a threat to their homes and land, especially in the rainy season.

Acknowledging the undeniable usefulness of its stream, resident Kerafaye Grant, who operates a farm in the community, revealed that she gets her irrigation from it.

“The river helps all of us. I have a small farm and we’ve been pumping water from the river for the past month and a half. Recently, two things have been happening. Outside of the rain, there’s a quarry below us. During the dry time, there isn’t that much water down the bottom so the majority of the water is up here, where I live. We realise that what was done the last time is that a part of the river bed was sunken to feed water to the lower areas. This had made the bed uneven so when it rains, all the water feeds on one side, closer to us.

“There is no river groyne and because of that the water comes and eats out the banking, and if it continues like that without being addressed, then the district down the bottom, called Old Road, will be flooded out,” she said.

Old Road resident Kashane Grossette was not perturbed when The Gleaner team disrupted his house-painting activities to enquire about the threat posed by the Negro River to the area in which he lives with his family.

In fact, he was happy to share his concerns and cry for help.

According to him, “The riverbank push up from in 2009 and supposed to be fixed, and all now nothing has happened. The other day when we had the major rain, if we had at least an hour more of rainfall, the community would have been completely washed away. That’s how serious it is and unless its fixed, then we’re in serious danger here in Danvers Pen.”

Leading the way to the bank of the river, a stone’s throw away from his yard, Grossette pointed out the heights the water level had reached during the heavy rainfall late last year.

Hailing two of his neighbours who were busy washing along its streams, Grossette quickly added that the river, though threatening, helps the community in more than one way.

“The river is of great importance to us because the water system here in Danvers Pen is not reliable. If you get water today, you not getting any til next week, so the river comes in very handy to do whatever you have to do in the home,” he said.

As to whether the Negro River is a friend or foe to Danvers Pen, he responded, “It’s a friend, but looking at it now, unless it is trained, it is really going to be more of an enemy in the near future.”