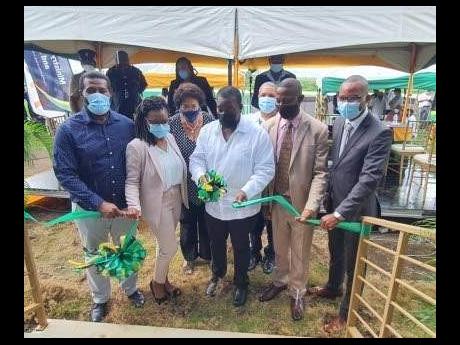 He said this should be welcome news for local and international travellers who, he noted, have long voiced concerns about the distance and length of time taken to traverse the island via road.

The minister also advised that work is under way to pilot the local aviation industry’s strong recovery from the impact of the coronavirus (COVID-19) pandemic.

He was speaking during the recent opening of the new $17-million Negril Aerodrome fire station in Westmoreland.

Montague said improvement works already undertaken at local aviation facilities by the Airports Authority of Jamaica (AAJ) include the establishment of pilot lounges at the Tinson Pen Aerodrome in Kingston, Ken Jones Aerodrome in Portland, and Ian Fleming International Airport in St Mary, while adding that similar engagements are slated for the other locations.

He advised that an overlay is scheduled for the runway at the Lionel Dempsher aerodrome in St Elizabeth and that “we are also putting in some restrooms and a waiting area”.

“Recently, we got a fire truck at Tinson Pen and we are going to be building a new fire station at Ian Fleming,” the minister further informed.

Montague pointed out that Jamaica’s 14 aerodromes provide commuters with the opportunity to save time and money to move across the island.

“Persons, notably visitors going to Ocho Rios, St Mary or even Port Antonio can now cut their journey in half by flying out of Montego Bay into the Ian Fleming International Airport, and the same goes for those who want to go to Kingston or Negril,” he stated.

Consequent on this, Montague said no effort will be spared in upgrading the aerodromes “and, by extension, the aviation industry”.

For his part, AAJ President Audley Deidrick said it is important that local stakeholders and business interests seize the opportunity to make aviation a central part of Jamaica’s economic recovery from COVID-19.

He said the fact that the industry is heavily dependent on tourism, which, he noted, accounts for more than 80 per cent of Jamaica’s aviation traffic, makes it a “no-brainer” for stakeholders to position themselves to make domestic travel far more accessible, seamless and timely.

“As we look to the post-COVID recovery of our aviation and tourism industries, we need to seize the opportunity to improve the facilities, which will place us in the forefront of the market when the resurgence begins,” Deidrick said.

“Let us, therefore, look forward and plan together with the expectation to emerge better and stronger, post COVID,” he further stated.

Meanwhile, Mayor of Savanna-la-Mar Councillor Bertel Moore, who also spoke at the function, urged that consideration be given to upgrading the Negril Aerodrome to enable it to accommodate international flights.

“In the near future, I would like to see this aerodrome become a halfway international airport. With Negril being one of the tourism meccas of Jamaica, I am optimistic that the facility can attract enough business to warrant international recognition,” Moore said.