A magnet for children 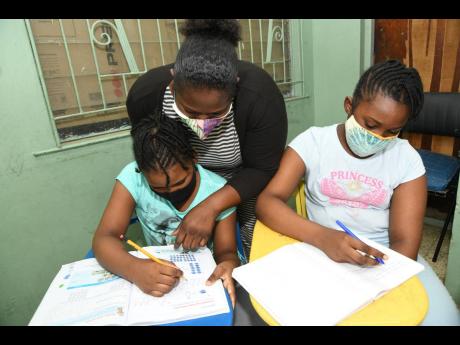 Rudolph Brown/Photographer
Toni-Ann McKenzie (centre) helps nieces Brihanna McKenzie (left) and Sapphire Farr at their home in Swallowfield, St Andrew, on Sunday. Despite her visual woes, Toni-Ann’s love for children has spurred her to accommodate several kids from the neighbourhood for schooling and other assistance.

At 32, Toni-ann McKenzie faces the possibility of being blind, but that thought is nowhere near the forefront of her mind.

The warm-hearted single mother of three, who also cares for her two 12-year-old nephews and a host of other kids, struggles with keratoconus, a condition that causes the cornea to be cone-shaped instead of dome-shaped, resulting in blurred and double vision and light sensitivity.

McKenzie is a magnet for children and has opened her home as a place of refuge in the gritty community of Swallowfield, St Andrew, which is affected by sporadic bouts of violence.

Raised in a single-parent home with her mother and four brothers, McKenzie said she felt deprived of maternal love, but that didn’t stop her from wanting to work with children.

“I love children. I have always had children around me. If you come to my house right now, on a given day, I have about 10 kids, including mine,” said McKenzie, who has been working with kids since high school despite having vision problems.

She dropped out of the Convent of Mercy (Alpha) Academy at age 16 because of illness.

It was also then that she discovered that she had challenges with her vision. Two years later, she was officially diagnosed with keratoconus.

Since then, she has tried to work twice but cannot keep a job because she sometimes suffers blackouts.

“I can’t go on the road by myself; the sun affects me. I always have to have somebody travelling with me,” she said.

But despite her ill health, McKenzie, an ardent Christian and member of Swallowfield Chapel, has not lost hope. She still wants to realise her dream of becoming a social worker and inspiring more children.

“I know what it is to feel insecure and not loved and not wanted, and that drives my passion to make sure that every child feels loved and wanted,” she told The Gleaner on Sunday.

She said she would love to assist more children but is unable to do so because she does not have adequate chairs or Internet capacity.

McKenzie requires a cornea transplant to improve her vision as she said she has passed the stage where special contact lenses or medicated glasses can be of any assistance. However, she has one major hurdle: finances.