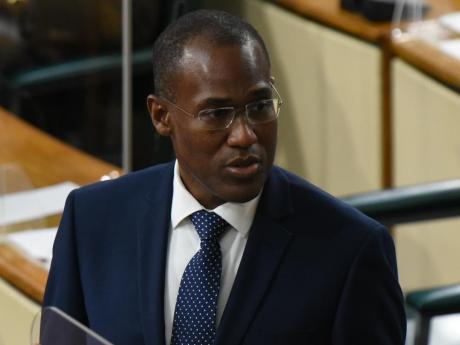 In opening the Budget Debate in Parliament this afternoon, Clarke said that the pandemic has decimated foreign exchange inflows into Jamaica, particularly in the tourism sector - Ian Allen photo.

The impact of COVID-19 on the Jamaican economy has produced staggering numbers that boggle the mind, Finance and the Public Service Minister, Dr Nigel Clarke, declared this afternoon.

In opening the Budget Debate in Parliament, Clarke said that the pandemic has decimated foreign exchange inflows into Jamaica, particularly in the tourism sector.

He reported that foreign exchange inflows from tourism are expected to fall by 74 per cent for the 2020/21 fiscal year or a US$2.5 billion decline, which he said has setback the country by 30 years.

The finance minister said, however, that Jamaica had no choice but to recover “our foreign exchange inflows.”

With a 12 per cent gross domestic product (GDP) decline forecast for the economy this fiscal year, Clarke said that this represents the worst economic contraction in Jamaica’s history.

He said that the closest comparison was a 6.5 per cent reduction in 1975.

“None is remotely close to the economic contraction that the country has lived through in 2020,” Clarke added.

The Government’s revenue intake is expected to take a big hit this fiscal year with a projected $70 billion decline.

With almost every sector recording declines for the current fiscal year, Clarke said the construction industry showed resilience and grew.

The finance and the public service minister pointed to what he said was a silver lining – that of the Diaspora’s response in sending US$600 million more in remittances to families here.

He said that remittances increased by 23 per cent over the previous 2019/2020 fiscal year.